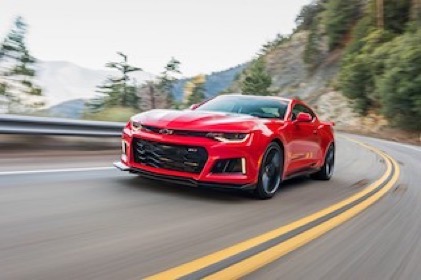 With a top speed of 198 mph, the Chevrolet Camaro ZL1 Coupe will satisfy anyone’s need for speed.

Chevrolet tested the max velocity of the ZL1 (with a 10-speed automatic transmission) on the high-speed oval at Germany’s Automotive Testing Papenburg GmBH proving ground. Compensating for wind speed, the top speed is the average achieved from running the ZL1 in both directions on the 7.6-mile loop — 202.3 mph in one direction and 193.3 mph in the other direction.

“This test caps an impressive list of performance stats for the Camaro ZL1, which was designed to excel at everything,” says Al Oppenheiser, chief engineer of Camaro. “It’s the most capable — and fastest — Camaro ever.”

The Papenburg testing was conducted on the ZL1’s production Goodyear Eagle F1 Supercar 3 tires with pressure set at 44 psi, the recommended setting for extended high-speed driving. The car’s only deviations from stock were mandatory safety equipment and data logging equipment.

“The ZL1 was developed with high-speed performance in mind, incorporating a balanced aerodynamic package that reduces lift without significantly affecting drag,” adds Oppenheiser. “After testing the car in standard settings, which produced the 198-mph average, we set the front and rear camber adjustments to 0 degrees and the tire pressures to the maximum allowable sidewall pressure, and saw the ZL1 average over 200 mph.”

Papenburg’s high-speed oval features 2.5 miles of straightaways and 1.3 miles of turns, with 49.7- degree banking on the top lane. The steep banking allowed Chevrolet test drivers to run the ZL1 flat out around the track without lifting off the throttle in the turns.

Special aero features include a stanchion rear spoiler that offers a lift/drag ratio compared to a blade-style rear spoiler, and a patent-pending auxiliary transmission oil cooler cover that reduces front-end lift with no drag penalty. The front-to-rear aero balance was also fine-tuned for high-speed stability.

Founded in Detroit in 1911, Chevrolet now does business in more than 115 countries and sells more than 4 million cars and trucks a year.