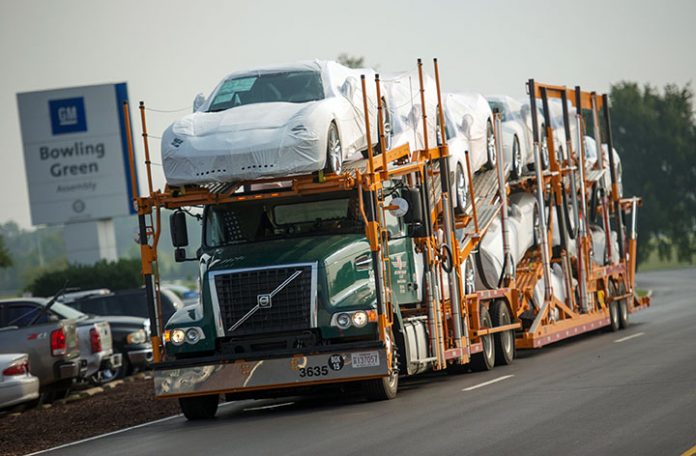 Chevrolet announced Wednesday it has begun shipping the 2014 Corvette Stingray Coupe to dealers. The automaker has produced approximately 1,000 Stingrays at its Bowling Green, Ky., assembly plant and the famed sports car will be arriving at showrooms within the next few weeks.

Mike Damico, Internet manager at Matthews-Hargreaves Chevrolet in Royal Oak, says there has been great interest in the new model — especially after the speedster was unveiled at the North American International Auto Show last January.

“We get people sending in inquiries, calling, and stopping by,” Damico says. “But it really started in earnest over the last 40 or 45 days.”

While Damico says that there’s always a lot of hype and enthusiasm when a new generation of Corvettes is released, he notes it’s especially true now.

“There’s a lot of interest right now, I think, partly because they have a new look to them, and partly because they’re bringing back an old name badge,” Damico says, noting that the Matthews-Hargreaves dealership will receive four units in the initial delivery. “It’s got a lot of people geeked about them. Even casual observers are excited.”

And Damico might be right. Ed Welburn, GM vice president of global design, noted: “Stingray is one of the hallowed names in automotive history. We knew we couldn’t use the Stingray name unless the new car truly lived up to the legacy.”

The 2014 Corvette Stingray is the seventh generation of the sports car, with a 455 horsepower and an EPA-estimated 17 mpg in city driving and 29 mpg on the highway.

The Bowling Green facility underwent a $131-million upgrade to support production of the Corvette Stingray, including approximately $52 million for a new body shop to manufacture the car’s all-new aluminum frame in-house for the first time.