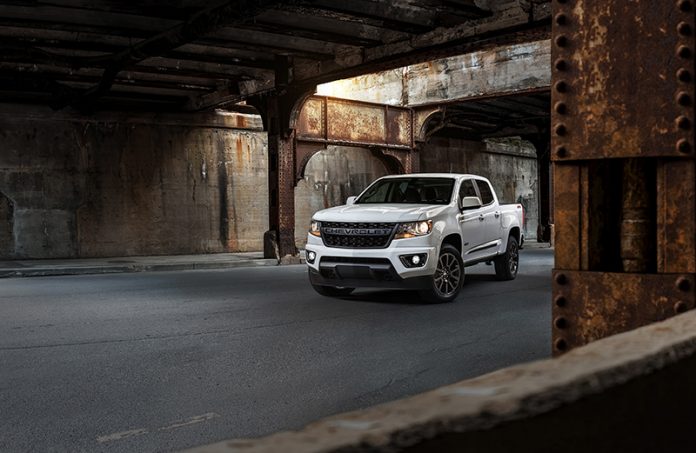 Detroit-based General Motors Co.’s Chevrolet is expanding its Colorado range with two special editions: the off-road Z71 Trail Runner and the street-focused RST. The Colorado was introduced as a 2015 model.

“The success of Colorado helped reignite the midsize truck segment, which increased 27 percent from 2015 to 2017,” says Sandor Piszar, director of marketing for Chevrolet Trucks. “It changed what customers expected from a midsize truck, brought new customers to Chevrolet, and has inspired competitors to follow Chevy’s lead.”

Both special editions feature the flow-through Chevrolet lettered grille first introduced on the Colorado ZR2 Bison. The grille also is available as an accessory for a manufacturer’s suggested retail price of $395, not including installation or tax.

The Colorado RST builds on the street-focused models offered on Tahoe, Suburban, and Silverado. For Colorado, RST is based on the LT trim and adds monochromatic exterior offset with black beltline and body side moldings. It also has a black tailgate bowtie, Colorado, and RST badges. It is the first Colorado to offer 20-inch wheels, finished in low-gloss black.

In addition, Chevrolet introduced 15 factory race components for the Colorado ZR2. Developed by Chevrolet Performance in collaboration with Multimatic and Hall Racing, the components were validated over 10,000 miles of off-road racing. Chad Hall, an off-road racer, and the Chevrolet team completed the Best in the Desert race series and used the Colorado ZR2 to pre-run the Baja 1000 race.

“Off-road racing is a brutal test of a vehicle, and especially its suspension components,” says Mark Dickens, executive director of Chevrolet Performance Variants, parts and accessories, and motorsports. “Over two years, Chad mercilessly pushed these ZR2 parts to the limit for the ultimate in development and validation … For the first time, you can buy the same Chevy Performance Parts that raced and won in the desert. All you need to add is the required safety equipment to build a pre-runner for scouting the Baja 1000 or a full-blown race truck capable of competing in the race itself.”

The parts can be purchased individually or as a complete package and go on sale between now and early 2019.