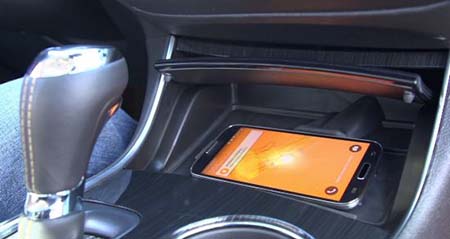 Chevrolet has unveiled a feature available in new car models that will protect smartphones from becoming overheated, which can cause damage to the phone’s battery over time.

“An air vent connected directly to the car’s air conditioning and ventilation system is directed to the charging bin where the phone rests for wireless charging, sending cool air to help lower the phone’s temperature,” says Dan Lascu, engineer for the Impala.

When Chevrolet engineers tested the brand’s wireless charging feature, they noticed some smartphones would stop charging or shut off after only a few minutes in high temperatures. Lascu says the cooling system helps the phone to stay cool while the smartphone is used for streaming music, navigation, or receiving phone calls.

The Active Phone Cooling operates when the air conditioning system is turned on by the driver. The feature will be available in the 2016 Chevrolet Volt and Cruze, which are equipped with wireless charging.