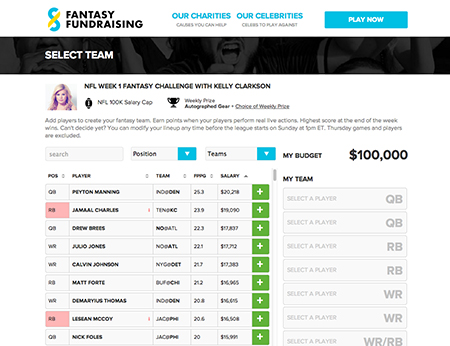 Birmingham-based Beyond Gaming has launched its latest venture — a website allowing users to compete against celebrities in fantasy football, all the while raising money for charity.

“Being a gaming company, we started thinking about how to apply that competitive fantasy sports and gaming concept to other industries,” says Ari Dolgin, chief development officer of FantasyFundraising.com, a partnership between the Birmingham firm and Sportcause in Tennessee. “And we realized it could be a good vehicle to drive donations for charities.”

In the U.S. and Canada, an estimated 41 million people play fantasy sports, creating their own teams of professional athletes and earning points based on how each of those athletes perform in real life. By gamifying the donation process, FantasyFundraising.com is opening the process to potentially appeal to a new donor base for charities, Dolgin says.

For its first year, the company has teamed up with three major charities — St. Jude Children’s Research Hospital, Make-A-Wish Foundation, and Mothers Against Drunk Driving — and will leverage each of their celebrity ambassador’s social reach to drive awareness.

“Kelly Clarkson has 10 million Facebook followers,” Dolgin says. “Warren Moon has 50,000 Twitter followers. The celebrity influence, act of giving, and exciting prizes such as a Meet ‘n Greet with Kelly, personal Skype session with Warren Moon, and a 50-inch LED TV, are sure to raise tons of money for these great causes.”

Other celebrities that have signed on for the current season include: actress Tiffany Thiessen, members of the country music band Montgomery Gentry, and NHL player James Neal.

And although celebrities can’t actually win the weekly or season prizes, which range from autographed gear to backstage concert passes, Dolgin clarifies that they’re still very much a part of the competition. “You’re competing against them for bragging rights, but everybody wins because it’s for a great cause,” he says.