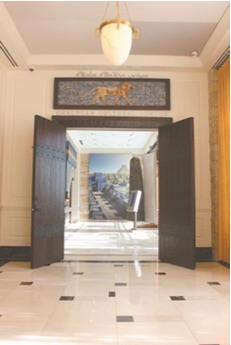 After more than a decade of curating artifacts and replicas, the Chaldean Cultural Center Museum at the Shenandoah Country Club in West Bloomfield Township today announced it will open its doors on May 2.

Representing thousands of years of history, the museum consists of five galleries, ranging from ancient Chaldean culture, faith and church, village life, the journey to America, and Chaldean culture today. The museum begins at 3300 B.C and takes guests through the progression of Chaldeans throughout history.

“We wanted to chronicle our history from ancient times to today, and establish that we are still a very vibrant community,” says Mary Romaya, executive director of the museum. “We want to honor the pioneers who had the courage to come to a new country without knowing the language or the economic system, but established themselves here.”

She adds that Chaldeans have been living in the United States, particularly Detroit, for more than five generations, and Romaya believes it’s important for today’s youth to know their history.

“We want the public at large to know who the Chaldeans are,” says Romaya. “We don’t want our story to be told for us. We may be a nationality without our own country, but we are a major economic force in southeast Michigan.”

The Chaldean culture is indigenous to Iraq and Syria (originally Mesopotamia), and today there are approximately 500,000 Chaldeans in the United States, 150,000 of whom live in metro Detroit.

Romaya says that the Chaldean Cultural Center curated the exhibits with a combination of ancient religious artifacts and replicas, including a replica of Hammurabi’s Code of Laws, which is accompanied by an interactive feature explaining the laws. The ancient gallery also includes legal and medical tablets with ancient writing, and jewelry dating back to the Babylonian empire.

The museum’s faith and church gallery consists of a replica of a baptismal font from a Chaldean catholic church in Iraq, and a replica of a sculpture depicting The Last Supper. The museum also obtained a piece of stone from the first Christian church in Mesopotamia, which they received from a Chaldean bishop in Detroit. They also have church books and gospels written in Aramaic, and interactive features and images throughout the gallery.

The village life gallery details the lives of Chaldeans before the 20th Century, depicting figures in traditional dress and artifacts donated by community members, including clothing, fur traps, vases, a charcoal iron, and grains used to make traditional meals. Holograms were created to show how villagers would have used these items in traditional Chaldean villages.

The museum’s journey to America gallery consists of immigration documents, including passports, naturalization papers, and steamship tickets dating back to the 1930s. KLM airline tickets and Iraqi identification cards in Arabic, English, and French represent Chaldeans who immigrated in the 1960s. The gallery also includes a reproduction of a 1930s-era Chaldean-owned grocery store, including an authentic phone, a cash register, and a radio equipped with a motion detector that plays a broadcast of a Tiger’s baseball game, which the museum obtained from a local radio station.

The final gallery, Chaldeans Today, features a 22-minute video with interviews of local Chaldean community members, including business people, teens, and recent immigrants, regarding their experiences, culture, and heritage. The exhibit concludes with photographs of Chaldean children ages 5-15 who represent the future of the community in southeast Michigan and the preservation of Chaldean culture.

The museum will be open Tuesday, Friday, and Saturday, and special arrangements can be made for school and tour groups.

To read an economic impact feature on the Chaldean and Arab communities in metro Detroit called “From The Middle East to the Motor City” in March/April 2016 of DBusiness, click here.