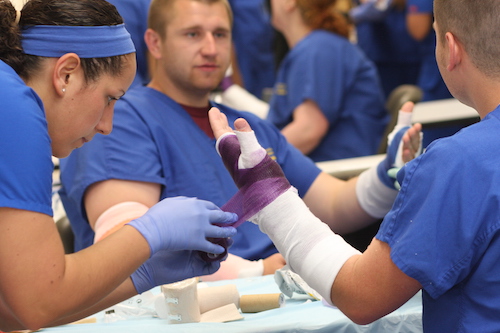 The new center will allow for expansion of the university’s physical therapy, physician assistant, audiology, and speech-pathology programs, which have been at full capacity for more than a decade, says Mackenzie Kastl, assistant director of public relations at Central Michigan.

“Those programs are in really, really high demand,” she says. “We know that there are students out there that are wanting to get into the classes, so those are really going to be the core offerings (of the center).”

The planning phase for the CMU Center for Integrated Health Studies and approval from the university’s board of trustees may take up to a year, Kastl says.

Kastl says the renovations will allow for a seamless flow between the new building; the creation of interdisciplinary programs for the university’s College of Science and Engineering with biomedical engineering, and its College of Business Administration with health information management; and other collaborations.

“Although it’s newer than some of the buildings on our campus, the Health Professions Building is more lab-focused,” she says. “So what we want to do is expand the capabilities to keep a student there all day with a collaborative space where they can work together.”

The Michigan Senate and House have approved $19.5 million in state funds for the university’s new center in the state budget awaiting the signature of Gov. Rick Snyder.

“This investment in the students of CMU will increase the health and wellness of families and communities across the state,” says George E. Ross, president of Central Michigan. “The (state’s) leadership and commitment to the residents of Michigan is clear once again with the approval of this funding.”

Central Michigan has more than 20,000 students at its Mount Pleasant campus, and another 7,000 enrolled online and at more than 40 locations across North America, including six academic facilities in metro Detroit.