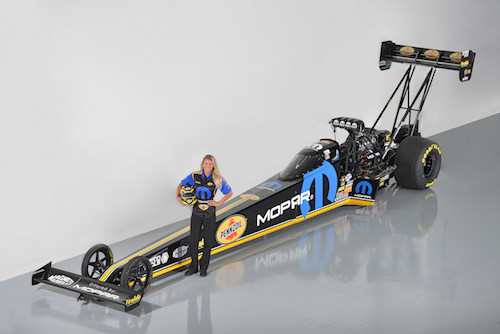 Center Line-based Mopar, FCA Group’s aftermarket parts provider that was established in the 1950s when it partnered with drag racing pioneer Don Garlits, is returning to drag racing with its decision to sponsor a National Hot Rod Association Top Fuel Dragster.

The company is partnering with Houston-based Pennzoil to sponsor Don Schumacher Racing driver Leah Pritchett, who will debut the blue Omega M on her dragster at the 37th annual Mopar Mile-High National Hot Road Association Nationals, held July 22-24 at Bandimere Speedway near Denver.

“We are extremely excited to team up with our partners at Pennzoil in our return to competition in the Top Fuel class,” says Pietro Gorlier, head of parts and service for Mopar at FCA – Global. “A key part of Mopar’s DNA has always been going fast at the track.”

The debut of Pritchett’s Mopar and Pennzoil vehicle will be aired live on the FOX Broadcast Network, marking the first time a National Hot Rod Association race has been broadcast live on a national television network.

Mopar is the service, parts, and customer-care brand of FCA US. The parts distribution center and packing operations in Center Line occupy 80 acres, and include an office complex and 1.2 million square feet of warehouse space. The company distributes more than 280,000 parts and accessories to 120 countries, and employs more than 1,000 people.