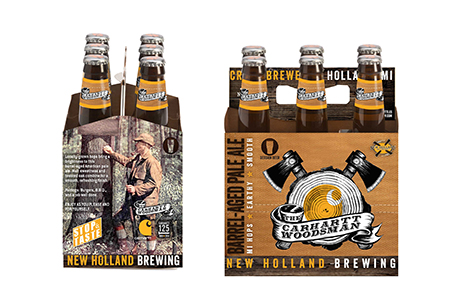 t“Carhartt approached us last summer and talked about making a beer as part of their yearlong celebration of their 125th anniversary,” says Fred Bueltmann, an owner of New Holland Brewing Co. “We’ve collaborated with people on different events, but we haven’t done anything quite like this before. Carhartt’s energy and creative ideas really took this to a whole new scale.”

tCalled the Carhartt Woodsman, the specialty brew will begin hitting store shelves and bar taps starting Sept. 21 in 26 different states. How long it’s available depends on how quickly the 10,000 cases of 24 bottles each sell, Bueltmann says.

tThe relationship has spurred the brewery to break into Iowa, Nebraska, and Kansas, three states that are also strong Carhartt markets, Bueltmann says. “We also sent beer for release to Vermont (another strong Carhartt market). Customers will have a chance to get to know our beer, but we don’t plan on being in that market on an ongoing basis.”

tThe session ale is inspired by various elements of history; founder Hamilton Carhartt’s horse and wagon deliveries; New Holland’s barrel aging program; and the Tin Woodsman from The Wizard of Oz, written by L. Frank Baum in Holland in 1899.

tBueltmann says he wouldn’t be surprised if the specialty brew led to increased crossover sales between customers of the two companies. “We certainly see energy between both of our audiences — both appreciate craftsmanship, quality, and a brand story,” he says. “Everyone we’ve talked to is excited about seeing these two brands together.”

tIn an effort to promote the new brew, the companies will launch a nearly 1,300-mile road trip. The Road Home to Craftsmanship will include stops at Grand Trunk in Detroit on Monday, followed by NHB Pub in Holland on Wednesday. The tour will also visit Milwaukee, Chicago, Des Moines, Omaha, and Denver on its way to the Great American Beer Festival, to be held Oct. 2-4 in Denver.

tFor more information about the tour and beer, click here.