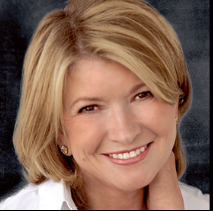 Kelly, a retired astronaut, engineer, and U.S. Navy Captain, spoke about courage under pressure and being a leader in difficult conditions. He flew his first of four missions in 2001 aboard Space Shuttle Endeavour, and has also commanded Space Shuttle Discovery.

“When the Navy sends you to land on an aircraft carrier for the first time, there is absolutely no one who wants to go with you,” Kelly said. “It’s like getting into an accident in your car, it’s like a controlled crash, I barely remember any of it.

“I am a prime example of someone who over came a serious lack of aptitude,” he said. “Life is a set of challenges, whether personal or professional. There are things in your business you can control, but there are things you can’t control. Focus on the things you can control but don’t block out all of the noise. What I learned is there is never an excuse for not communicating with the people you work with.”

Martha Stewart, an entrepreneur, Emmy-award winner, and author of more than 75 books, spoke about her career path and how she markets and sells her products on various channels.

“I had a fabulous evening last night,” Stewart said. “I got off the plane and immediately went to Pony Ride (in Corktown) and saw these amazing entrepreneurs. I had dinner at Gold Cash Gold — the food was utterly superb — and then got a Shinola watch.”