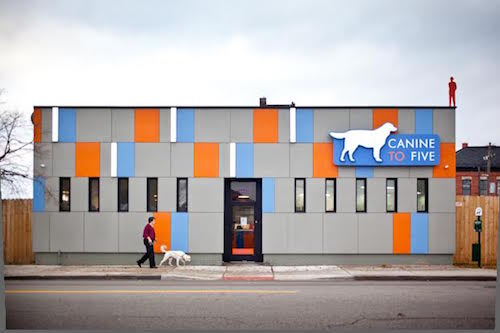 Canine to Five, which offers dog daycare and boarding services, has announced a $1.6 million expansion project that includes the construction of a new building and renovations to its existing facility in Detroit’s Midtown district.

The current 6,000-square-foot facility will remain open during construction. It will be remodeled once the new building is complete. The expansion project is expected to be completed by next fall.

“Downtown’s population is growing and that includes the dog population,” says Liz Blondy, founder and owner of Canine to Five Detroit. “Canine to Five’s growth and the types of dogs we’re able to serve began to be limited, and with this expansion we can serve many more dogs and provide more specialized care.”

She says the expansion will include increased capabilities for smaller breeds of dog, the addition of a senior dog lounge, a private play area for dogs that do not do well in groups or have special needs, an increased capacity of the dog daycare program from 100 to 175, and the creation of 10 new jobs.

The architectural firm for the project is Detroit-based DMET, and Eastpointe-based Monahan Co. will manage the construction.

Founded in 2005, Canine to Five Detroit is located in close proximity to downtown, Wayne State University, the Detroit Medical Center, and several major expressways. Canine to Five also has a second facility in Ferndale, located at 1221 E. Nine Mile Rd.