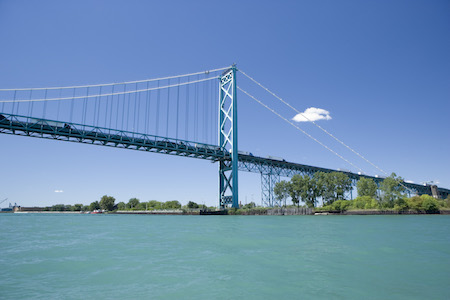 The Canadian government approved the Canadian Transit Co.’s application for the proposed Ambassador Bridge Enhancement Project, spanning the Detroit River between Windsor and Detroit to replace the existing bridge. Additionally, the government is moving forward with the Gordie Howe International Bridge Project.

“There have been many challenges our company has faced over the years in pursuit of this moment,” says Matthew Moroun for Detroit International Bridge Co. “We are now tasked with the duty to construct a privately funded bridge with the hard work of thousands of engineers, steel workers, construction experts that will be employed to deliver this once in a lifetime project.”

The project is subject to conditions that will ensure the efficiency, safety, and security of the crossing and mitigate the impacts of the project on the local community. The conditions include the dismantling of the existing bridge when the replacement bridge is open, improving local infrastructure, creating new public green spaces, and protecting the environment and considering Indigenous interests.

The project will include:

“The Government of Canada recognizes the importance of ensuring the continued flow of trade and travellers between Windsor and Detroit, one of the most important Canada-United States border crossings,” says Marc Garneau, minister of transport. “The construction of the replacement Ambassador Bridge together with the Gordie Howe International Bridge project will ensure that Canadians continue to benefit from the efficient movement of people and goods at this crossing while providing infrastructure improvements for the local community.”

The Windsor-Detroit gateway consists of the Ambassador Bridge, the Windsor-Detroit Tunnel, the Detroit-Windsor Truck Ferry, and the Detroit River Rail Tunnel. It is the busiest commercial land border crossing between Canada and the U.S., with 30 percent of the countries’ trade conducted by truck. Thousands of jobs are expected to be created in the U.S. and Canada.