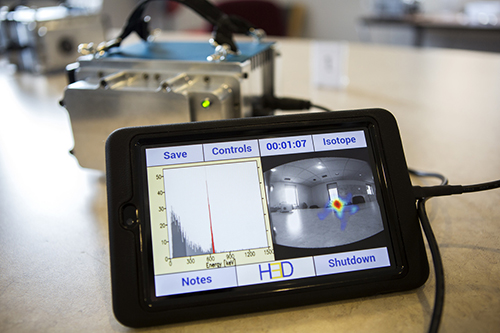 “This technology enables people to ‘see’ radiation,” said Zhong He, a professor of nuclear engineering and radiological sciences at U-M and CEO of H3D. “This should enable the early detection of leaks by locating abnormal radiation, a much better understanding of radiation sources to protect workers, and it could be a tool for the cleanup effort of nuclear waste and fallout, such as in Fukushima in Japan.”

The ‘Polaris-H’ detector grew out of a project in He’s lab, where it was originally developed for catching terrorists. In time, however, the team realized that the technology could work in the nuclear energy industry.

At least four U.S. nuclear power plants, as well as NASA and the Department of Defense, are using versions of the camera, including northern Michigan’s Cook Nuclear Plant near St. Joseph in Berrien County, where the device has been well received.

“We can find things now in 30 minutes that could take weeks to find before,” said Robert Hite, radiation protection manager at the Cook Nuclear Plant. “All of our technology that we have — that I’ve worked with for 30 years — doesn’t touch what this shows us.”