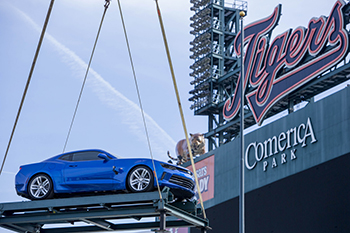 A metallic blue Chevrolet Camaro SS and a metallic orange Colorado pickup truck — the 2016 Motor Trend Car and Truck of the Year — will be on view atop the Chevy Fountain behind centerfield in Comerica Park in time for the Detroit Tigers’ Opening Day on April 8.

“Last year, we were able to showcase our vehicles to nearly 3 million Tigers’ fans at Comerica Park and even more watching from home,” says Paul Edwards, vice president of marketing for Chevy. “We hope the Camaro SS and Colorado help stir the same emotions our home team does when they hit one out of the park.”

Edwards says the vehicles were lifted into place today — a three-hour long process. Chevy has sponsored the fountain for the past seven seasons, and selects vehicles from its lineup to display each year. 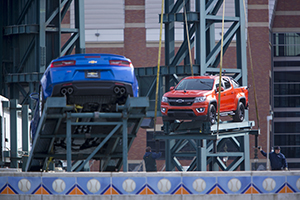 The Camaro SS features 20-inch wheels, LED taillamps, a hood with functional air vents, and a 6.2-liter V8 engine that produces 455 horsepower and 455 pounds per feet of torque. The Chevy Colorado pickup truck offers either a diesel or 3.6-liter V6 engine and comes with advanced safety features along with connectivity features such as Chevy MyLink and Apple CarPlay.

Last season, Chevy chose a yellow Velocity Corvette Z06 and a special Midnight Edition Silverado to sit atop the fountain.

The Detroit Tigers will play the New York Yankees at 1:08 p.m. for their home opener.