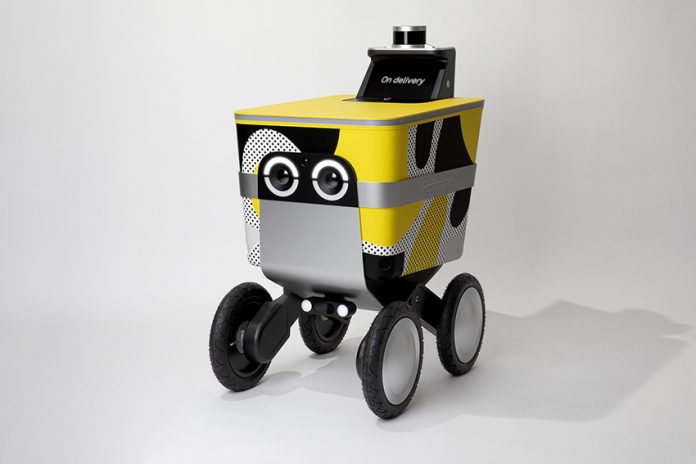 “We realized we are in a unique position to create an autonomous delivery vehicle with socially aware navigation that understands how to navigate cities while meeting specific customer needs,” says Bastian Lehmann, co-founder and CEO of Postmates.

“We took a design-first approach with Serve that walks alongside people and fits into our communities. We were able to use data to model how food and goods could move around cities even more efficiently when rovers join our existing fleet of more than 350,000 Postmates. Ultimately, we believe that goods should move through cities at nearly zero cost to consumers.”

Serve has an advanced set of sensors. It can carry up to 50 pounds and go up to 30 miles on a single charge. Customers will interact with Serve using a touchscreen and cameras, and Serve will communicate using lighting in its eyes and light ring on top to signal movement and change in direction.

“One thing we learned early on is that we need to develop a language for rovers and humans to understand each other’s intentions,” says Lehmann. “We have developed a specific rover-human interface so that people understand what rovers are doing at any moment.”

Postmates plans to initially deploy Serve in the Los Angeles area, and the company will work with local governments to develop framework that can enable on-demand commerce while respecting the public right-of-way. Serve’s full roll-out will take place over the next 12 months in key cities across the U.S.

Postmates was launched in 2011 when it offered delivery from restaurants and stores. The company now operates in 550 U.S. cities as well as Mexico and provides access to more than 200,000 merchants.

The company’s services are available in Detroit, and Postmates partnered with Ford Motor Co. in January to test self-driving vehicle deliveries in select markets.