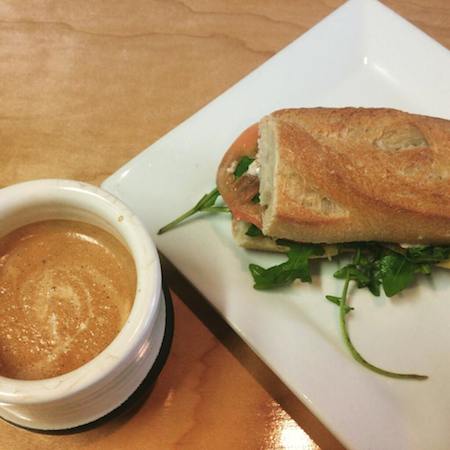 “From the few weeks we’ve been open (for our soft opening), we’ve found that customers in the area want more food,” Carbonell says. “They’re looking for more salads, sandwiches, and soups. So this is going to be more of a bistro location.”

The new setting, just east of the Lodge Freeway, builds off its sister store’s menu, which includes pastries, doughnuts, and bocadillos, the Spanish version of sandwiches on a crusty baguette. For lunch, the café serves fresh salads from Fresh Corner Café and homemade soup from Mudgie’s Deli in Corktown.

The New Center coffeehouse will also offer a conference room that visitors can soon rent by the hour, half-day, or full day. The room is about the size of a personal dining room, with seating available for 10.

The interior of the shop features a wooden bar, preserved brick flooring, and a few trinkets from the space’s previous owners, including a small bank vault.

But while some things change, other things will stay the same, including the Latin-inspired drink menu, says Carbonell, who’s originally from Barcelona, Spain. Popular items include the Mexican Mocha, or Mexican chocolate with espresso, and the Las Chulas Chuapurado, a South American chocolate and cinnamon drink often served to celebrate special occasions.

The venue also offers a selection of teas from South American countries, including Argentina and Uruguay.