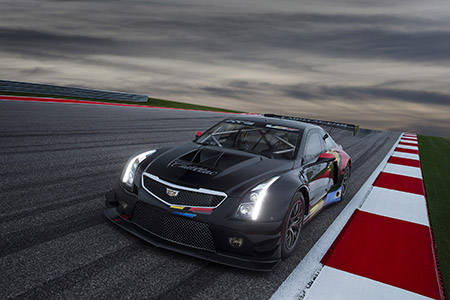 Cadillac unveiled its latest race car, the ATS-VR, at the Circuit of the Americas, home of the Formula One United States Grand Prix in Austin, Texas. The next generation of Cadillac’s V-Series is expected to begin competition in 2015.

The new model — described as the racing extension of the 2016 Cadillac ATS-V Coupe, which debuts this week at the Los Angeles Auto Show — carries an LF4.R 3.6L, Twin-Turbo V-6 that achieves up to 600 horsepower. As it meets international FIA GT3 specifications, it can potentially run in more than 30 different GT series around the world. Other marques in the racing class include Aston Martin, Audi, Bentley, BMW, Ferrari, Lamborghini, McLaren, and Porsche.

Among the modifications performed to meet FIA GT3 specifications, the fenders of the ATS-VR were redesigned to contain FIA-mandated tire sizes. Other modifications include an aero kit that gives the ATS-VR a strong stance, and a carbon fiber front splitter — complemented by corner-mounted dive planes — that provide frontal aerodynamics.

“This car sounds wicked and screams like it’s ripping holes in the air,” says Andy Pilgrim, a Cadillac Racing driver. “I love it. We have paddle gear shifters for the first time, and I’m enjoying the new tools.

“The engine torque is remarkable, as always, pulling strongly out of the corners.”

Since its inception in 2004, Cadillac Racing has amassed 26 wins, 91 podium finishes (including wins), and 22 pole positions with the CTS-V sedan and CTS-V Coupe race cars.