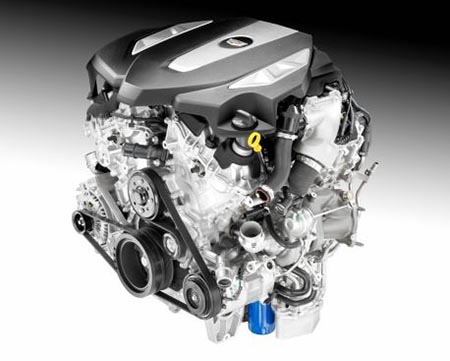 Cadillac’s new generation of V-6 engines, led by the Twin Turbo V-6 that the automaker says will be one of the industry’s most advanced gasoline engines of its kind, will be built in Romulus for final assembly in Hamtramck.

“The all-new 3.0L Twin Turbo powers past the traditional segment leaders with higher degrees of the performance and refinement their reputations were built on,” Bartlett says.

The all-new 2016 Cadillac 3.0L Twin Turbo will make its world premiere on March 31 at the New York International Auto Show. Production begins late this year at General Motors’ Detroit-Hamtramck Assembly Plant, while the engine will be produced at the automaker’s Romulus Powertrain Operations assembly facility, which received a $540-million investment to build the next-generation V-6 engines.

Bartlett says the 3.0L Twin Turbo is the only six-cylinder engine to combine turbocharging with cylinder deactivation and stop/start technologies to conserve fuel. Cadillac expects the combination to enhance fuel economy by up to an estimated 6 percent. Cylinder deactivation temporarily deactivates two of the cylinders in light-load driving conditions to enhance efficiency and seamlessly reactivates them when the driver demands full power.

With the stop/start system, the 3.0L Twin Turbo is shut down in certain driving conditions such as stop-and-go city driving to reduce fuel consumption, automatically restarting when the driver takes his or her foot off the brake pedal.

Cadillac’s new 3.0L Twin Turbo is part of a new generation of technologically advanced V-6 engines, which includes a new version of the award-winning 3.6L naturally aspirated engine employed for years across the brand’s model range. Each features all-new structural and combustion elements designed to complement higher performance and greater efficiency with exceptional quietness and smoothness.

Features shared by the 3.0L Twin Turbo and 3.6L include:

“This new architecture leverages the best of Cadillac’s proven, awarded V-6 engine technology and takes it farther with a finer focus on refinement and durability to match its benchmark output and efficiency,” Bartlett says.