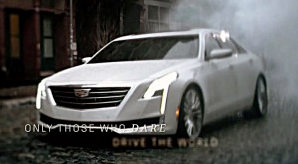 Cadillac announced today it will use a mixed material approach for the lightweight body structure for its 2016 CT6 sedan. The structure will be aluminum-intensive, but includes 13 different materials.

“The structure of the CT6 is one of the most-advanced body systems we’ve ever produced,” says Travis Hester, Cadillac CT6 executive chief engineer. “The innovation surrounding our joining techniques have enabled us to create a vehicle structure with the highest torsional rigidity of any Cadillac while achieving one of the most mass-efficient vehicles in the segment.”

For the vehicle, 64 percent of the body structure will be aluminum, which saves about 198 pounds when compared with steel construction. Weight reduction helps to improve fuel efficiency and create a more resilient passenger cell, the automaker says.

The CT6 is a full-size luxury car, designed to compete with German and Japanese cars, such as the BMW and Lexus brands.

The CT6 will debut at the New York International Auto Show at the end of the month. It will go into production later this year at General Motors’ Detroit-Hamtramck assembly plant. The MSRP will be around $70,000.