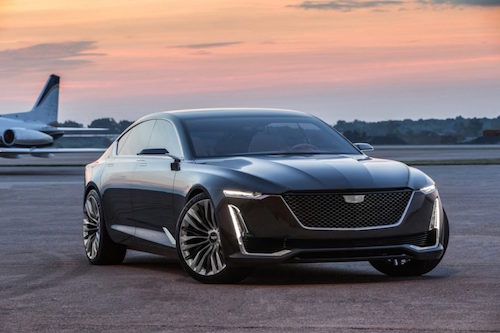 Following a series of private previews, Cadillac’s new Escala concept vehicle, a large, 4-door sedan featuring a liftback design, will be displayed this weekend at the annual Pebble Beach Concours d’Elegance in California.

“Escala is a concept car, but one based upon the unrelenting rise of our product substance,” says Johan de Nysschen, president of Global Cadillac. “Depending on the development of market segment for large luxury sedans, Escala is a potential addition to our existing product plan.”

He says Escala, which features details and technology being developed for the company’s future models, was designed to be both a driver’s car and a flagship sedan.

Three curved screens with OLED (organic light-emitting diode) display technology are located in the front of the concept vehicle’s cabin. The thin, curved displays are layered in front of the driver, with the backsides wrapped in hand-stitched leather embossed with the Cadillac script.

Escala also includes new designs for connectivity and control, including a central control module that enables the driver to execute tactile commands as well as voice and gesture control technology.

“On the interior, we pushed further,” says Andrew Smith, executive director of Cadillac Global Design. “It’s about precision and ingenuity in craftsmanship, and the artistic integration of technology.”

Escala — Spanish for “scale”— is a concept for a larger companion to the recently launched 2016 Cadillac CT6. At 210.5 inches in length, the concept vehicle is roughly 6 inches longer than the CT6.

Escala is also the third in a series of concepts Cadillac has debuted at Pebble Beach in recent years, following the Ciel convertible in 2011 and Elmiraj coupe in 2013.