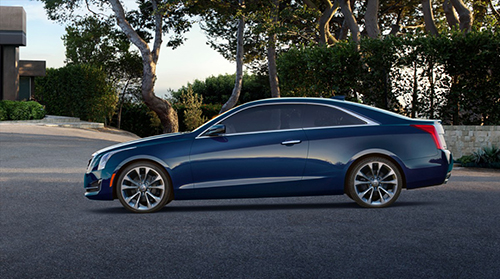 Cadillac showed today that good things come in small packages with the unveiling of its 2015 ATS Coupe at the North American International Auto Show in Detroit. The automaker’s first compact luxury coupe is the first production model to wear Cadillac’s revised crest and will go on sale this summer.

“The 2015 Cadillac ATS Coupe is a natural step in the brand’s progression, and another fun-to-drive and technologically advanced product for a new generation of drivers extending our target groups,” says Uwe Ellinghaus, spokesman for Global Cadillac. “It is an exclusively distinctive American alternative, unique in its class, yet delivering a sporty and sophisticated driving experience rivaling the world’s best.”

The vehicle offers the choice of rear-wheel or all-wheel drive and either a 2.0L turbocharged four-cylinder or a 3.6L six-cylinder engine. With the four-cylinder engine the 2015 model can deliver 272 horsepower and 295 lb.-ft. of torque, or nearly 14 percent more than the current ATS sports sedan.

“This is an historic time for Cadillac as it enters its 112th year,” says Robert Ferguson, senior vice president, Global Cadillac. “Cadillac is in an era of growth as we enter 2014 as a brand that is expanding and elevating.”

Cadillac’s saw sales increase on both a national and international level in 2013, up 22 and 28 percent, respectively. In the United States, the brand ended 2013 as the fastest-growing full-line luxury brand, Ferguson says.

“More power with less weight is always a better combination for performance, and the ATS Coupe offers one of the best power-to-weight ratios in the segment, making it feel lighter, more direct, and responsive,” says David Leone, Cadillac’s executive chief engineer. “Engineers vetted the ATS’s performance on the track, and the coupe benefits from that exhaustive validation — all matched with Cadillac’s trademark refinement.”

Leone says the 2015 ATS Coupe rides on the same 109.3-inch wheelbase as the sedan, but features its own bodywork. The roof, doors, rear fenders, and trunk lid are unique to the ATS Coupe, along with a specific front fascia and front fenders that accommodate a wider track than the sedan.

The new model is among the first to feature a 4G LTE connection, featuring a new built-in Wi-Fi hotspot that can connect up to seven devices at once. Additional technologies added to the ATS Coupe include the capability to remotely start the engine or lower the windows with the key fob or the owner’s smartphone.

“Cadillac saw huge product-driven momentum throughout 2013,” says Bill Peffer, Cadillac’s vice president of sales and service. “Much of that growth came from buyers new to Cadillac, with Lexus, BMW, and Mercedes-Benz being three of the top traded-in brands.”