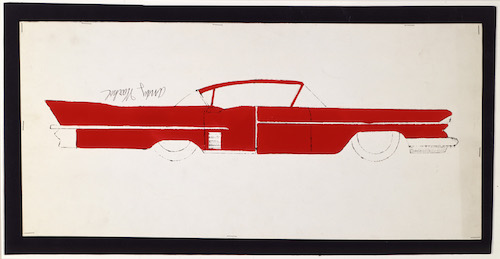 “Andy Warhol’s mastery of popular culture as high art made him one of the most influential American artists of the last century,” says Melody Lee, director of Brand Marketing for Cadillac. “Letters to Andy Warhol celebrates Warhol’s unique individualism and Cadillac as a cultural inspiration for his important work.”

The exhibit focuses on five letters to or from Warhol and fashion designer Yves Saint Laurent, singer Mick Jagger, the Museum of Modern Art, the New York State Department of Public Works, and a mutual friend of his and writer Truman Capote. Each letter has inspired artistic contributions, which will be on display, from athlete and fashion model Aimee Mullins, shoe designer Brian Atwood, writer and editor Derek Blasberg, actress Sienna Miller, fashion designer Zac Posen, and more.

The exhibition also includes five artworks across varying mediums and techniques, and from different periods of Warhol’s career, that all share Cadillac as the subject, including his Four Male Costumed Full Figures, Car, Cadillac, Seven Cadillacs, and Sign.

During the first few weeks of the exhibition, Cadillac House, a public space located on the ground level of the auto brand’s global headquarters in New York, will have a limited production Cadillac Park Avenue DeVille from 1962 and 1963, which was featured in the Seven Cadillacs work, on display. Other heritage vehicles that will be on display include a black 1958 Sedan DeVille and a red 1959 Eldorado Biarritz.