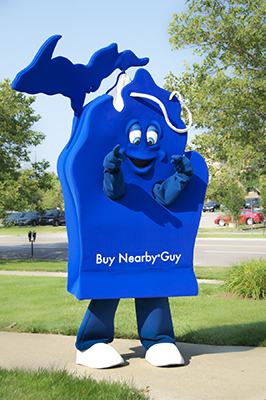 Michigan shoppers can expect to get familiar with “Buy Nearby Guy,” a new face that will be displayed in retail outlets throughout the state in the coming months. The campaign by the Michigan Retailers Association seeks to encourage local purchases while better supporting area communities.

Buy Nearby Guy is an 8-foot-tall representation of a shopping bag in the shape of Michigan. The persona will be installed in local stores, downtowns, shopping malls, and community events in the coming months as part of MRA’s year-round campaign to buy local and stimulate the state’s economy.

“Retail purchases made right here in Michigan have a monumental impact on our state and local communities, and we now have new data showing just how positive those benefits could be,” says James P. Hallan, president and CEO of MRA, which introduced the mascot at a news conferences today in Detroit, Lansing, and Grand Rapids.

Hallan notes that if Michigan consumers switched only one in 10 of their purchases from out-of-state merchants to retailers in Michigan, the state would gain more than $900 million in increased economic activity and 7,463 new jobs.

In addition, a study by East Lansing-based Anderson Economic Group released today found that Michigan in 2015 would gain an estimated 75,000 jobs and $9 billion in additional economic activity, including $2.5 billion in new wages, if Michigan consumers bought from retailers here rather than from “remote” sellers.

“Each and every Michigander has the ability to make a substantial impact on businesses like mine, simply by switching their purchases from out-of-state, online retailers to their neighborhood stores and shopping centers in the communities where they work, vacation, and visit,” says Robert Stanzler, owner of Detroit Mercantile in Detroit’s Eastern Market.

Hallan says the MRA made sure to “Buy Nearby” when it needed a mascot, turning to The Parade Co. in Detroit to design and produce Buy Nearby Guy.