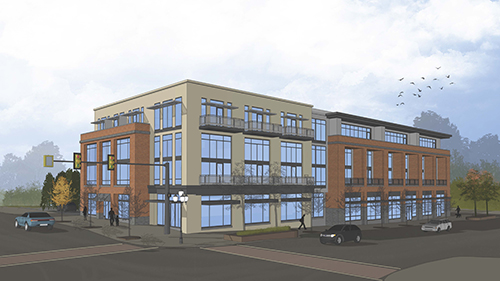 The Auburn Hills City Council has approved a plan for a $10-million mixed-used development at the southwest corner of Auburn and Squirrel roads, the city announced today.

Called Rivers Edge of Auburn Hills, the new development by Bingham Farms-based Burton-Katzman will consist of a four-story building with approximately 9,300 square feet of commercial space and 31 apartment and loft units.

The planned unit development project is slated to begin this summer and be complete by the end of summer next year.

The announcement follows the October openings of four new or redeveloped structures, including the Downtown Education Nook study space; the University Center, which hosts college-level classes as well as classes for the Avondale Virtual Academy, Auburn Square apartments and retail; and a 233-space parking structure.

In September, the city announced The Moceri Cos. will develop The Parkways, which will include 76 townhouse units, 72 stacked flat units, and a three-story 160 unit congregate senior care complex situated along a new public boulevard that will lead to Auburn Road in the downtown area.