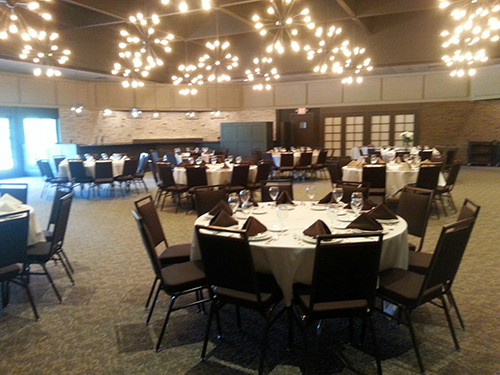 After receiving more than $250,000 in upgrades, the Freedom Hill Banquet and Events Center in Sterling Heights will reopen in June and already has two weddings on the books.

“We wanted to design a hall for brides on a budget,” says Tom Celani, owner of Luna Hillside LLC, Freedom Hill’s parent company. The revamped center includes a new sound and high-definition video system, “so a bride can just plug in her iPod to show photos or play her music — she doesn’t have to hire anybody.”

Built in the 1970s, the facility now features a 30-foot-long bar, new flooring, chandelier lights, an outdoor patio, and a gazebo area, providing couples with the option of an on-site ceremony. Drop-down screens and other technologies allow the venue to also be used for corporate events, such as seminars, training, and parties.

Celani says engaged couples who visit the banquet hall through August will receive tickets to the 4,200-seat Freedom Hill Amphitheatre as part of a summer-long promotion. Likewise, couples who book their reception at the venue will receive two tickets for each member of their wedding party for the following year. “It gives the wedding party an excuse to get together again a year later,” he says.

The amphitheater, which Luna Hillside renovated and reopened last summer, will kick off its summer season with Diana Ross on June 13. Other scheduled acts include Il Volo (June 19), The Temptations and Four Tops (June 21), 311 (July 6), Styx, Foreigner, and Don Felder (July 10), The Beach Boys (Aug. 10), and Tony Bennett (Aug. 15).

For more information or to schedule an appointment to visit the banquet center, contact Faye Wills at 586-292-8700.