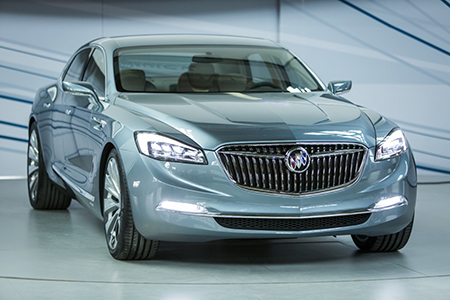 Buick is looking to the future with a new Avenir concept sedan that focuses on passenger well-being and technology integration.

“The interior is designed with the driver and passengers’ comfort and well-being in mind,” says Ed Welburn, vice president of General Motors Global Design. “Technology is seamlessly integrated and builds on the features that have become hallmarks for today’s production models – helping drive a new generation of customers to Buick.”

The Avenir — French for “future” — instantly configures gauge cluster and infotainment screen displays based on prior customization. It also recognizes the user’s music preferences, calendar schedule, and recently visited locations from a cellphone’s GPS. It can even pick up a podcast the user was listening to at the moment it last was interrupted.

Buick’s user experience designers are also pushing the Avenir’s technologies for home integration, which would allow accessing home security cameras or the capability of turning on outside lights and closing a garage door that was inadvertently left open.

“The use of color, material, form, and amenities can affect a person’s mood and feeling,” Wetzel says. “The Avenir is a showcase of thoughtful and modern design with the capacity to anticipate and facilitate the personal needs of its occupants. It’s absolutely its own getaway destination.”