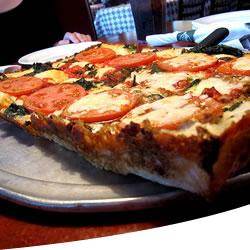 Buddy’s Pizza, which opened its original location in 1936 at the corner of Six Mile and Conant in Detroit, is continuing its expansion throughout southeastern Michigan with the opening of its 11th location in Novi this fall.

Wesley Pikula, Buddy Pizza’s vice president of operations, says the new location will feature its Sicilian-style square pizza, which it developed in the 1940s. “We call it Sicilian-style, but the industry is calling Detroit-style,” he says. “And by taking that product, which originated at Six Mile, and expanding it to other communities is great for the city, too. We’re almost creating our own pizza category that Detroit hasn’t really had before.”

The menu at the Novi location will be consistent with the brand’s 10 other stores, and will be designed along the same lines as Buddy’s Shelby Township location. “It’s sort of a retro design that has a little bit of an urban feel,” he says. “It’s going to be an open space and feel very airy. There’s lots of parking and it’s an easy in and easy out with the freeways off of 12 Mile Road — it’s a great venue.”

The Novi restaurant will employ approximately 125 people and will include indoor and outdoor seating areas, a banquet room, a main bar, and a carry out area.

IN OTHER PIZZA NEWS, Detroit Style Pizza Co. will be featured on an episode of You Gotta Eat Here, which will be broadcasted on the Food Network and the Bio Channel sometime in 2015.

The segment, to be filmed at the Roseville location Sunday and Monday, will include an interview with Shawn Randazzo, the company’s president, as he prepares the pizzeria’s Detroit Style Pizza — the recipes calls for the sauce to be ladled on last, after the cheese and toppings.