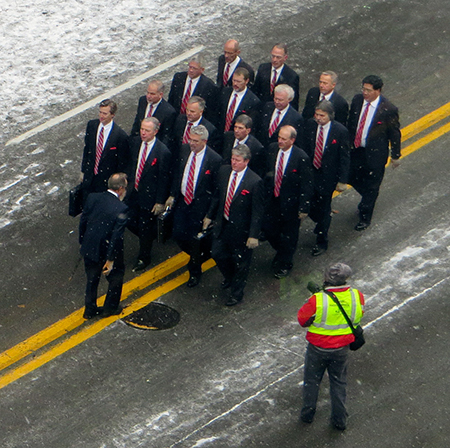 It’s the end of the era. Donning their traditional business suit and red tie uniforms, the Fred Hill Briefcase Drill Team will make its final Thanksgiving Day Parade appearance in Detroit on Thursday.

“It’s 30 years from when we started, and we weren’t really kids when we started,” says Frank Hill, who first launched the drill team in 1985, with a laugh. “I have quite the injured reserve list, (with) bad knees, bad hips, and bad backs. Plus, if you notice, people don’t carry briefcases anymore.

“It’s like that era has marched off into the sunset, and we’re about to march off with it,” Hill says.

The drill team’s performance will be televised on WDIV-TV (Channel 4) around 10:50 a.m.

Hill first formed the 17-member drill team as a marketing scheme to promote his men’s clothing store in Plymouth, Fred Hill Haberdashers, that specialized in business suits. He put a large poster in the front window of the store reading, “General Hill is looking for a few good men.” The only requirements were that the members have military march — or just simply walking — experience.

“You didn’t need to be too good to join this thing,” he says.

Marching in rows of four and led by Hill, the squad made its first appearance at the 1985 Fourth of July Parade in downtown Plymouth. A few years later, the routine — loosely inspired by the 1981 film Stripes, starring Bill Murray — was part of America’s Thanksgiving Parade in Detroit.

And it did continue. Word got around, and the team landed several trips to Tempe, Ariz., where they performed in the Fiesta Bowl Parade. Hill estimates there have been at least 150 performances, ranging from the grand opening of Neiman Marcus at the Somerset Collection in Troy to fundraisers for the likes of the Ronald McDonald House in Detroit; and even two appearances in the Macy’s Thanksgiving Day Parade in New York.

“It’s been an incredible ride,” says Hill, noting the team has rubbed elbows with everyone from Kim Kardashian and Alex Baldwin as a result of their performances. “It’s got us to places we otherwise never would have been.”

While the team’s final performance will take place right where it all started — the 2015 Fourth of July Parade in Plymouth, which will draw some of the retired members — Thursday’s routine will mark the end of their participation in America’s Thanksgiving Parade Presented by Art Van.

“This will be No. 25 for us,” Hill says. “We’ve done it enough that we don’t need to practice much. Except this year, we’ve added a little farewell maneuver — we did have to rehearse that for at least a minute or two.”