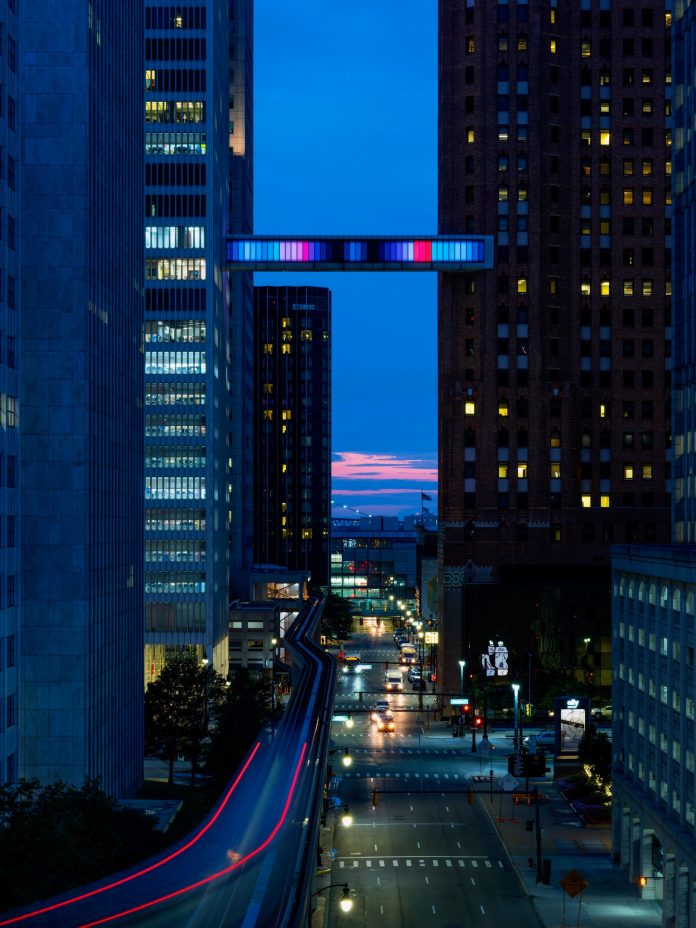 “Detroit Skybridge,” an unused bridge connecting One Woodward and the Guardian Building, has gotten new life as the structure for a permanent installation by contemporary artist Phillip K. Smith III. The bridge, which features windows colored by light, was illuminated for the first time just after 8 p.m. on Saturday.

The 100-foot bridge was built in 1976 and connects the 16th story of the two buildings. The bridge hasn’t been used since the 1990s and will remain closed. Smith, who is based in Palm Springs, Calif., created a unique color program meant to be enjoyed from the outside that lasts for more than an hour and features 44 lighted windows on one side and 37 on the other.

The windows change color slowly, which is meant to contrast with the quickly moving city below, says Smith. As you go higher in the city, you run into slower-moving things, he says, such as the bridge and, eventually, clouds.

“A lot of my work is very site-specific, and I’m interested in being inspired by the place,” says Smith.

Smith was presented with the project in December 2017 and visited Detroit to see the bridge in February. This is the first – and probably last – skybridge Smith expects to work on, but much of his work is done on large-scale architectural projects.

“It has been very exciting to come back to the city … and experience the change that’s been happening here,” says Smith, who returned to Detroit a few times to work on the project. He adds that it was an honor to be part of Detroit’s revitalization and says he acts as a reporter to people in Palm Springs who are interested in what’s going on in Detroit.

Smith is interested in bridging the gap between art and architecture through his work, as well as using light as a medium. He says the buildings the bridge connects represent the full spectrum of light, as One Woodward is white, while the Guardian’s mosaic ceilings are similar to the rainbow that makes up white light.

Smith’s work can be found as far as China, Seattle, Arizona, and Milan. All of his work is large-scale and done in lights.

“Detroit Skybridge” will illuminate each evening around sunset and run until about midnight. Its schedule will adjust with the seasons. Smith says the work is mostly self-sustaining, and LED lights are long-lasting. However, the bulbs can be replaced if needed.

The installation was made possible through a partnership between Library Street Collective, Quicken Loans Community Fund, Bedrock, and Wayne County.

The bridge was originally built to allow employees of Michigan Consolidated Gas and the American Natural Resources Co. to move between the buildings. ANR relocated to Texas in the 1990s, and the bridge was closed as fewer people used it.