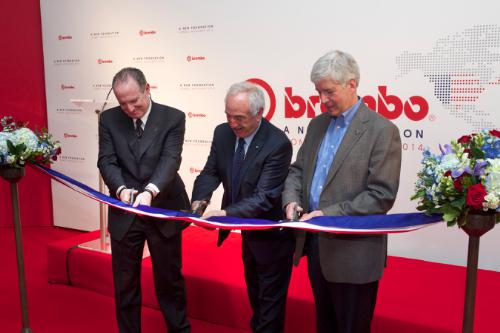 Brembo North America — an automotive supplier in Plymouth whose brake systems have supported F1, IndyCar, NASCAR, and the Sports Cars Racing Series — has expanded its manufacturing operations in Homer, west of Jackson, and will invest more than $115 million in the facility by the end of 2015.

With the expansion, Brembo officials announced Wednesday that North America will become the company’s No.1 market by the end of 2014. The company recently announced a nearly 28 percent year-over-year revenue increase for the first quarter of this year.

“This expanded and modernized production facility represents a new foundation for Brembo in North America, enabling us to increase our presence in the U.S. market and offer better service to our clients,” says Alberto Bombassei, chairman of Brembo S.p.A.

Bombassei attributes Brembo North America’s recent growth to two events, including the purchase of the Hayes-Lemmerz Automotive Brake Component division in 2007 and the substantial growth of U.S.-based OEMs.

Brembo first acquired the Homer facility in 2007, when it began manufacturing discs in the U.S. The 440,000-square-foot plant, which has undergone two expansions, has more than 450 employees.