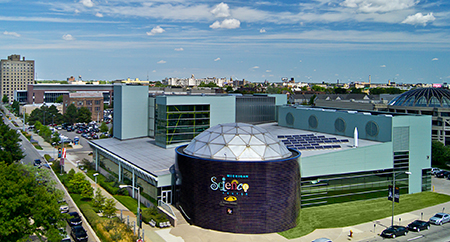 Detroit’s startup ecosystem is booming, and to make sure no one gets left behind, this year’s Brand Camp Summit — a homegrown tech entrepreneur conference that first launched in 2008 — is focusing specifically on inclusivity.

Carrying the tagline, “Making Tech for All People,” the event will bring together a diverse group of speakers for its Oct. 21 conference at the Michigan Science Center. The topics will include everything from how to submit an application for a seed accelerator program to the importance of building an inclusive company, says Hajj Flemings, founder of Brand Camp University.

“We have a lot of organizations that are doing tremendous work here, but if you don’t have individuals representing these underrepresented groups at the tables, part of that conversation gets lost,” says Flemings, adding this year’s theme was inspired by the Rise of the Rest tour stop in Detroit this past June.

Flemings says while the energy was high when former AOL chairman and CEO Steve Case awarded $100,000 to Detroit-based startup Stik, the diversity in the crowd and startups represented was lacking. He wrote an open letter about the event, noting that while “the current class of startups, founders, and developers in Detroit is disproportional in terms of race and gender, (this) is similar to other mature startup ecosystems like Silicon Valley, Boston, New York, Boulder, and Austin to name a few.”

To facilitate the diverse evolution of Detroit’s startup ecosystem, this year’s Brand Camp Summit will bring together speakers from a wide range of backgrounds and geographic locations (more than 40 percent are minorities, including women), Flemings says.

As an example, Flemings points to co-working space Bamboo Detroit as a noted facilitator of “creating a very strong, inclusive diverse community.” Members include a variety of businesses such as Hometown History Tours, Southern Tide men’s clothing, and iziSurvey, a mobile survey platform.

But inclusion for the sake of checking a box is useless, Flemings says. “It might make people feel good, but there’s not a lot of value in that. So let’s change the conversation and consider what the impact this can have on organizations. We have a chance to champion this kind of discussion.”

He adds that this year’s attendees can also expect more exposure to potential funding via an investor panel that will include Silicon Valley Bank and Intel Capital.

For more information, or to register for the event, visit brandcampsummit.com.