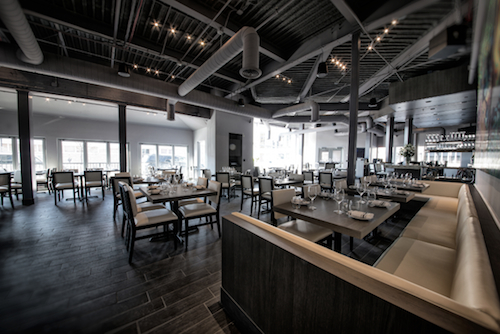 Following months of reconstruction, Bistro 82 at Lafayette and Fourth in downtown Royal Oak has set its sights on becoming the ultimate dining and drinking experience in metro Detroit.

“We really enjoy the word ‘premier,’ because that’s what we want to be,” says Scott Sadoff, director of operations. “We want to be a premier spot to dine and stay for a while. We’re really looking forward to settling ourselves within the roots of Royal Oak.”

Located in the former Sangria space, Bistro 82 features a dining room and bar on its first floor and a lounge called Sabrage on the second level. The French-influenced, modern European bistro menu features a bone marrow appetizer, Wagyu hanger steak entrée, and a classic French onion soup, Sadoff says. “I think what sets us a part is that we use the freshest, highest quality ingredients that we can get our hands on,” he says.

Design elements include onyx bar tops (one black, one white), a salt water acquarium, and non-slip Spanish porcelain tile flooring. There’s a 350-bottle wine cellar on the first floor and a 240-bottle champagne cellar on the second.

Ultimately, A.F.B. Hospitality Group in Berkley, which owns Bistro 82 and Sabrage, would like to grow with other concepts and locations within the next 18 months, Sadoff says. “But right now, our focus is taking on care of everyone that walks within our four walls.”

A few blocks away, Blackfinn AmeriPub will re-open on Feb. 28 following renovations and an updated menu. The restaurant temporarily closed earlier this month.

In related news, the owners of a parcel of land fronting the west side of Main Street, between Second and Third, are entertaining new uses for the property after a deal fell through to establish a Jolly Pumpkin beer pub on the site. “We’re looking at a multi-level, mixed-use development, preferably upper level offices with ground floor space for a restaurant and retail,” says Don Nahat, president of Huntington Real Estate Group in Royal Oak, and one of the owners of the property. The parcel currently houses a former drive-thru bank along with surface parking.