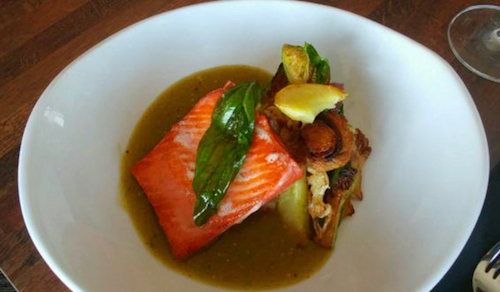 With their new golf course projected to open in Spring 2017, owners at Gull Lake View Golf Club & Resort in Augusta, Mich. has opened Blue Stem, an upscale restaurant overlooking the Kalamazoo River on the highest point in the county.

For golf enthusiasts and hungry residents, Blue Stem serves up casual fine dining and notable views halfway between Kalamazoo and Battle Creek.  Despite its close proximity to the new links-style Stoatin Brae course, the glass and cut stone facility was created as a year-round attraction.

Gull Lake View has been owned and operated by the Scott family for three generations, and Bill Johnson, the company’s vice president said Blue Stem is part of the resort’s continued effort to remain one of the state’s top golf attractions. In addition to the restaurant and golf course, the owners have spent over $1 million in the past two years renovating the resort’s guest rooms, villas, and original East Course Grill.

Blue Stem’s new executive chef, Renee Hogge, was selected for her experience in opening and running her own restaurants from the ground up.

“I spent many years in my own businesses, the Brighton Bar and Grill in Brighton and the Red Cedar Grill in Williamston, and 11 years at the Barton Hill Country Club in Ann Arbor,” she says. “After having my own business and all those years taking care of private club members, it’s a perfect way to meld not just the food and the customer service, but to make sure resort visitors have the perfect experience from the time they get out of their car until they get back in the car.”

Hogge says she curated a modern American menu with a few unconventional twists, including caraway seeds, leeks, and cabbage as a nod to the golf course’s Scottish roots.

Blue Stem is open for lunch and dinner Tuesday through Saturday.