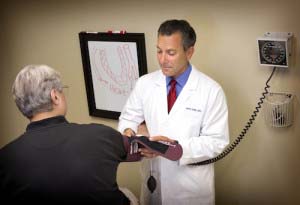 Dr. Joel Kahn, a local cardiologist and author, will now offer a blood test to detect elevated levels of trimethylamine-N-oxide (TMAO), which can lead to a heart attack or stroke, at his clinics in Bloomfield Township and Grosse Pointe Farms.

“The ability to now measure and prevent disease here in Michigan is taking a major medical leap forward,” Kahn says. “It is very important to continuously be able to offer the most advanced and up-to-date medical technologies available that advance heart disease prevention.”

Kahn says he’s among the first physicians in Michigan to offer the TMAO testing. He says patients with elevated levels of TMAO are nearly two-and-a-half times more likely to have a cardiac event compared with patients with lower levels of TMAO. The test costs $55.

Kahn says in 2014, Cleveland Clinic researchers reported that red meat contains carnitine and eggs contain choline, which converts to TMAO. They found food-based amino acids are converted to TMAO due to bacteria found in the gut of omnivores.

Last fall, Kahn opened clinics in Bloomfield Township and Grosse Pointe Farms that focus on direct patient care and concierge medicine, along with the prevention and reversal of heart disease. Patients pay an annual fee for services.