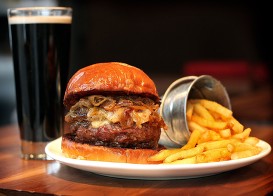 Jeremy Sasson, restaurateur of the Townhouse in downtown Birmingham, plans to open a restaurant by the fall on the first level of One Detroit Center, a major Class A office building at Woodward and Congress owned by iStar Financial and managed and leased by Signature Associates in Southfield.

Sasson, who opened Townhouse at Pierce and Martin streets in downtown Birmingham in August 2011, will bring some of the eatery’s design elements to One Detroit Center, including large windows that open to an outdoor dining space, bright red awnings and table umbrellas, large planters, and an open kitchen.

“Detroit has a great kinetic energy going on downtown, and we saw a market that is hungry for restaurateurs that provide great food, beverages, design, experiences, and atmosphere,” Sasson says. “I feel the market is underserved, and we see the opportunity to offer some of things we don’t offer in Birmingham like private dining and a capacity for catering and delivery.”

While the name of the eatery is still undecided, Sasson says the space will have seating for 120 people inside, and 140 people outside. The design, which is being handled by Ron and Roman in Birmingham, will be open, inviting, and evoke Detroit’s rich history.

“When the building opened 30 years ago, it was built for a bank (Comerica), so it had to be secure, but we plan to open some of those spaces up much like we did in Birmingham,” Sasson says. “The landlord was really visionary and they have been great to work with. The new restaurant will be like the big brother to Townhouse.”

Sasson says the menu is a work in progress, but could include some of the offerings from the Townhouse such as Imperial Wagyu tenderloin with truffle frites, ancho and maple salmon, shrimp fried rice, townhouse burger, kale tabbouli, and seasonal charcuterie.