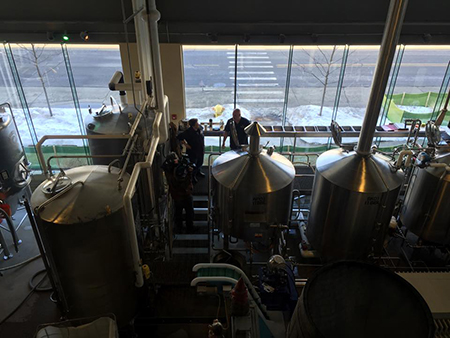 Birmingham’s Griffin Claw Brewing Co., a combined taproom, biergarten, brewing, and distilling facility, has added a new barrel aging room and has plans to expand its retail space and biergarten.

“We outgrew the brewery months ago,” says Scott LePage, Griffin Claw spokesman. “It’s a running joke that every time we have to load a delivery truck, we have to move everything to get to it.”

The new barrel aging room, which is about 3,000 square feet, has large garage doors that will be open nine months out of the year, which “will look like art in a sense, (lit) with back lights,” LePage says. “Now (we’ll be able to) double our production over where we were at originally.”

The brewing company also has plans to offer spirits with the addition of dedicated equipment in the barrel aging room.

LePage says the added retail space will be on the backside of the brewery and the  biergarten will be expanded in the next five months.

While there is discussion on opening another taproom at other location, LePage says Griffin Claw is focused on distributing beer to its Michigan customers.

“Our growth is only determined by how much beer we can make and we’ve exceeded that,” LePage says. “(But) we want to do Michigan right (and that means) being able to distribute and not having an issue to get your hands on (our beer). I believe we can do that out of the Birmingham site.”