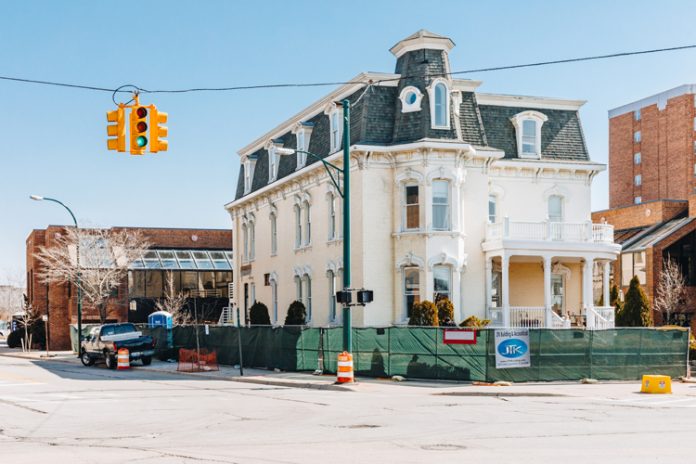 Adachi, a Japanese-inspired restaurant, is slated to open for dinner in the restored Ford-Peabody mansion on Aug. 15 in Birmingham. Michael Schlow, a chef, restaurateur, and owner of Schlow Restaurant Group, is working with real estate developers Kenny Koza and Clint Mansour.

“Kenny and I are excited to bring Adachi to life in the Ford-Peabody mansion,” says Mansour. “It’s such a vibrant and historical landmark in Birmingham, and we’re happy to be part of its revival.”

The menu will rotate seasonally and use local sources to offer classic and inventive Japanese cuisine. Lloyd Roberts, executive chef, trained at The Art Institute of New York City, worked in kitchens all over the world, and learned French and Asian cuisine working with chefs Jean-Georges Vongerichten at Vong in New York City, and Nobu Matsuhisa at Nobu 57, Nobu Moscow, and Nobu Budapest.

David Kraus will be the restaurant’s general manager. Molly Allen of Washington, D.C. designed the restaurant to accentuate the mansion’s history and rebirth.

“It’s such a beautiful building filled with so much charm and character,” says Koza. “Clint and I really wanted to re-invigorate the space and excite people with a unique experience that will keep them coming back, time and time again.

“By partnering with Michael Schlow and the Schlow Restaurant Group, we will be able to deliver a fun, neighborhood vibe with creative cuisine and an elevated level of knowledgeable service that guests can enjoy every day or for a special occasion.”

Adachi expects to add lunch and brunch in the next few months. The eatery will open just as a major reconstruction of Old Woodward in downtown Birmingham has now been completed.