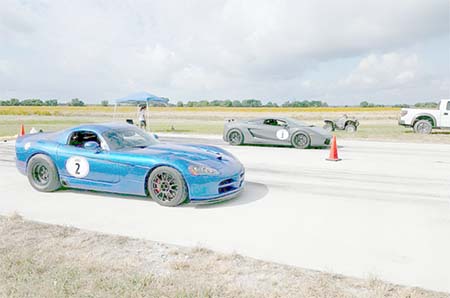 ConMar Racing in Birmingham aims to set the world speed record in a ¼-mile, ½-mile, and 1-mile race with a single car, in this case a super-charged, all-wheel-drive 2008 Lamborghini Superleggera. The feat, which has never been accomplished, would be a stunning achievement for two self-described hobbyists.

“We are like Two Men and a Truck out there. We are racing against teams that work on race cars every day, and we’re in it as a fun hobby,” says Van Conway, president and CEO of Conway MacKenzie, a consulting and financial advisory firm in Birmingham, who is partners in ConMar Racing with David Mardigian, CEO of MCM Management Corp., a specialty contractor in Bloomfield Hills.

Formed in 2013, ConMar Racing won a major race in Chicago last year with a 2006 Dodge Viper Twin Turbo supercharged by Nth Moto in Minnesota. The Viper hit a top speed of 213.0682 mph, though it tied with a Nissan GT-R Alpha 16 Twin Turbo. A mathematical impossibility, ConMar was awarded the trophies after it was determined the Nissan’s time was the result of a delayed or faulty clock.

“In the world of extreme racing, anything can happen,” Conway says. “We were just glad to come home with the trophies. But you don’t win every day. We were just at the Texas Invitational, which is the Super Bowl of crowning the fastest streetcar in America, but things didn’t work out as we planned. We learned from it, and now we’re wiser and even more excited to win it the next time.”

Both the Viper and the Lamborghini can produce more than 1,300 horsepower.

The race team includes drivers, mechanics, engineers, and crew personnel as well as a luxury car hauler. Between Conway and Mardigian, the pair own more than 30 sport cars including a 1971 Chevrolet Chevelle, a 1968 Plymouth Roadrunner, a 1951 Ford F-1 Frame Off (pickup), and a 2015 Chevrolet Corvette Z06, among others. Conway says his wife, Lori, often kids him that he buys a car every week.

“We lean toward owning and racing American sports cars, and let me tell you, the Big Three automakers make some amazing race cars,” Conway says. “What we have learned is that success comes down to horsepower in relation to a car’s weight. It can be complicated to get the right formula to win, and that’s what it’s all about. Neither David nor I drive in the races, we leave that to our professional drivers, but this is one of the best hobbies there is.”