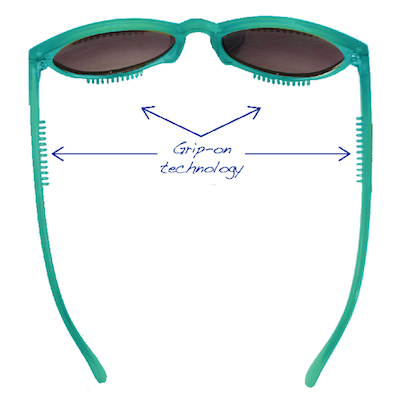 Birmingham’s Nancy Oram’s innovative idea to keep sunglasses or reading glasses from falling off your head or getting lost, will be hitting the shelves of select stores and boutiques nationwide later this month.

“When you’re running errands on a typical Saturday morning, you have to put your sunglasses somewhere (as you go from the outdoors to indoors),” says Oram, founder of StaysOn Eyewear. “You can’t put them in your purse because they’re going to get scratched, and then they continuously fall off when you wear them on top of your head.”

But thanks to the headband-like grips along the lower inner frames and temples of the Oram’s eyewear, glasses can be easily be worn on top of the head without falling off, says Oram, who came up with the idea after losing her favorite pair of sunglasses to the bathroom floor during a Detroit Pistons game in 2012.

“I thought, ‘I don’t want to go through this again,’” Oram says. “So I took the grassroots method and headed to a dollar store, where I bought 100 pairs of glasses and 100 different headbands, and just started retrofitting them.”

A year later, Oram had a prototype, and she soon signed a global licensing agreement with New York–based Fantas-Eyes to bring StaysOn to market.

Last August, the company celebrated its soft launch with the release of the initial collection, but now, Oram is gearing up for a full product launch to the mass market.

She’s in talks with some major players, although she says that she can’t name names just yet. “Spring is the big push for eyewear,” says Oram, noting that StaysOn will release a new collection, featuring 24 different styles, this March.

She adds that the product has generated considerable interest from both the boating and golf communities. “This type of product is made for a very active lifestyle. So now, we’re in the process of developing sports sunglasses for men and women to appeal to that audience. For men, we’re doing a completely different design, that’s more of a wraparound,” Oram says.

Nearby retailers including Fenton Farms Golf Club in Fenton and Accessories by Stephanie inside Henry Ford Hospital in West Bloomfield, will be among the local outlets offering the grip-on glasses concept.

For more information about StaysOn Eyewear, priced at $20, visit staysoneyeswear.com.