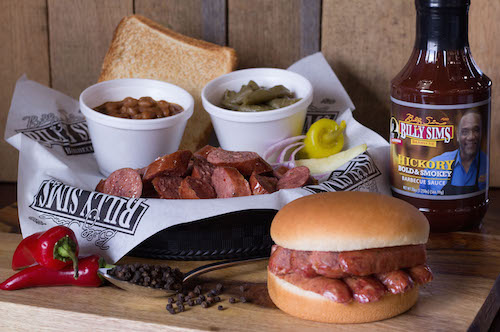 Billy Sims BBQ, a barbecue franchise co-founded by former Detroit Lions running back Billy Sims, plans to open 10 restaurants in Michigan, Kansas, and Oklahoma in 2016, including a new location in Roseville this month.

The chain first began operation in 2004, started franchising in 2009, and now has more than 50 locations across six states.

“We are excited to open another Billy Sims BBQ in the Detroit area,” says Jim Turner, the franchisee who will own and operate the new location. “We are looking for additional sites both in Detroit and possibly Grand Rapids for future locations.”

Menu items include nine meats such as full rack ribs, brisket, pulled pork, chicken, turkey, and bologna that are all smoked daily on-site over pecan wood.

Sims will be coming to Roseville in late July or early August to attend the grand opening of the 2,400-square-foot restaurant. Michigan’s fourth Billy Sims BBQ, the eatery will be located at 31042 Gratiot Ave.

“We want to bring our barbecue to guests across Michigan and will open new locations in the coming years,” says Jeff Jackson, co-founder and CEO of Billy Sims BBQ.