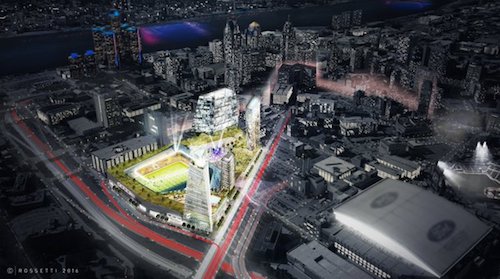 As billionaires Dan Gilbert and Tom Gores apply today to Major League Soccer for an expansion franchise at a planned new stadium at I-375 and Gratiot Avenue in downtown Detroit where the abandoned Wayne County jail project sits, the investment group has been working to identify alternative sites for the prison and neighboring courts.

The so-called Justice Complex, a 15-acre site that includes the Frank Murphy Hall of Justice, Wayne County Juvenile Detention Facility, Wayne County Jail Annex, and related buildings, would see those operations move to another area in Detroit under the proposal. It’s clear from recent interviews that one of the proposed relocation sites, the Mound Road Correctional Facility at Mound Road and Davison Street on the city’s east side, will not be considered due to a lack of nearby amenities and logistical challenges.

Other sites under consideration, DBusiness Daily News has learned, include the east side of I-75, north and south of Warren Avenue where the county and city of Detroit own land and numerous facilities; the former Michigan Central Station site at Michigan and 14th avenues; and two vacant office buildings on the west side of the Lodge Freeway, north of Howard Street.

Of the likely sites, the favored location is I-75 and Warren Avenue due to close proximity to three major freeways (I-75, I-94, Lodge), the ability to combine the justice operations in one area, and nearby amenities for court personnel and visitors such as Eastern Market and the Midtown district. The area also makes the most financial sense

Gilbert, founder and chairman of Quicken Loans Inc. in Detroit, along with dozens of other businesses including the Cleveland Cavaliers (with partners), and Gores, chairman and CEO of Platinum Equity and owner of the Detroit Pistons (with partners), say in addition to a 20,000- to 25,000-seat multi-use stadium, the former jail site could accommodate a hotel, offices, residences, stores, restaurants, entertainment, and parking.

The pair says the project would serve as a welcoming gateway to the fast-growing downtown Detroit sports-and-entertainment district. Left undetermined is which if any of the court facilities could be redeveloped into new uses, or replaced with midrise towers.

“Do we want a major jail at the front door of downtown?” Gilbert said when he, Gores, and Major League Soccer Commissioner Don Garber announced their plan last April in downtown Detroit. “If there’s an alternative, is that a better alternative?”

The transfer of the Justice Complex to make way for Gilbert and Gores’ $1-billion project, bounded by Gratiot, I-375 service drive, and Macomb and Beaubien streets, would need to be approved by the Wayne County Commission. As it stands, the current site does not generate tax revenue.

If the county moved the jail and court operations to I-75 and Warren, where most of the property on the east side of the freeway is owned by government entities, the redevelopment of the Justice Complex would generate substantial new revenue in the form of property taxes and other levies.

MLS’s Garber strongly suggested in April that Gilbert and Gores would get a franchise if they can acquire and redevelop the jail property. “Detroit is one of those markets that intrigued us” from a geographic expansion standpoint, Garber said in April. “More importantly, if you look at the passion, and the energy, and the millennial-driven (culture) and ethnic diversity … that’s the kind of dynamic that exists right here in the city.”

Soccer has been growing in popularity in recent years. There are 92,000 registered youth soccer players in Michigan, and some say there are at least as many individuals playing at for-profit venues like Ultimate Soccer Arenas in Pontiac.

What’s more, in 2014 and 2016, soccer matches held at Michigan Stadium in Ann Arbor between some of Europe’s most popular soccer franchises, including Real Madrid and Manchester United, drew sellout crowds of more than 110,000.

If Gilbert and Gores’ development moves forward, the city and county stand to collect millions of dollars in tax revenue. Estimates show the project would generate $836 million in economic activity, along with 5,500 construction jobs, over a five-year period.

What’s more, the court facilities are aging and need to be renovated. When the Frank Murphy Hall of Justice was completed in 1968, it and other related buildings replaced what was a mishmash of crumbling infrastructure dating from the late 1800s, including a park, two cemeteries, and the former Memorial Hospital.