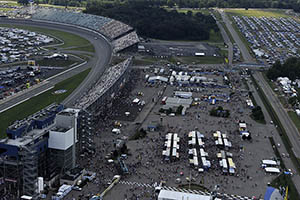 Nearly 200,000 people are expected to turn out for the inaugural Big Mitten State Fair and Festival, to be held Sept. 3-7, 2015, at the Michigan International Speedway in Brooklyn.

The fair will be a new take on an old tradition, says John Burtka, vice president of Big Mitten State Fair LLC, referring to the original Michigan State Fair, which first debuted in Detroit in 1849. The fair was held at the Michigan State Fairgrounds on Woodward Avenue near Eight Mile from 1905 until it was discontinued in 2009.

While event organizers are waiting to release further details later this summer, Burtka confirms that they have signed a multi-year contract and expect the fair will be an annual event.

“There will be a lot of elements from the original state fair that people miss, but we’re also willing to take (the approach of asking), ‘What would the state fair look like if it were invented today, and how can it reflect the state, with our skills and needs?” Burtka says.

The Big Mitten State Fair, now four years in the making, isn’t the only event trying to fill the void of the original fair. The Fifth Third Bank Michigan State Fair — to be held Labor Day weekend (Aug. 30 – Sept. 1) at the Suburban Collection Showplace in Novi — also builds upon the legacy of the historic festival.

“There will definitely be some competition, but we’ll have different content and programming,” Burtka says. He adds that the speedway, which has more than 8,000 campsites and “was built for events like this,” will also be a key factor in the Big Mitten’s success.