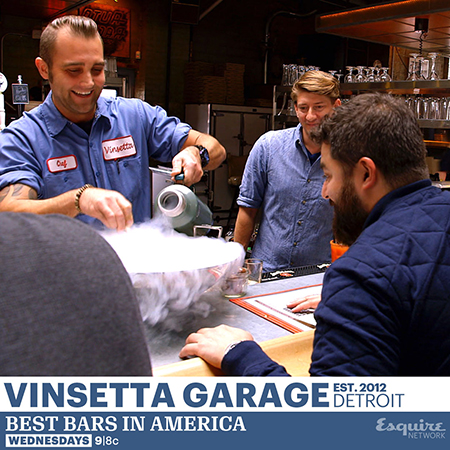 Berkley’s popular Vinsetta Garage, a restaurant known for its unique take on comfort foods served out of a former auto repair shop, will be featured on Esquire TV’s show Best Bars in America, which airs at 9 tonight.

Esquire magazine named Detroit “Bar City of the Year” in its June/July 2014 issue, highlighting Detroit such venues as the Old Miami, PJ’s Lager House, the Bronx Bar, and others, along with suburban restaurants and bars such as Ferndale’s Oakland Art Novelty Co. and Vinsetta Garage.

Best Bars in America, hosted by comedians Jay Larson and Sean Patton, explores taverns featured in Esquire magazine’s annual list of the best in the country. Tonight’s episode will feature the best bar food in America, with stops in San Francisco, Chicago, Los Angeles, and the Vinsetta Garage.

Located on Woodward Avenue between 11 and 12 Mile, the restaurant is known for its variety of burgers, pasta bowls, coal-fired pies, and macaroni and cheese. It’s also a popular stop leading up to the Woodward Dream Cruise, held this year on Aug. 15.