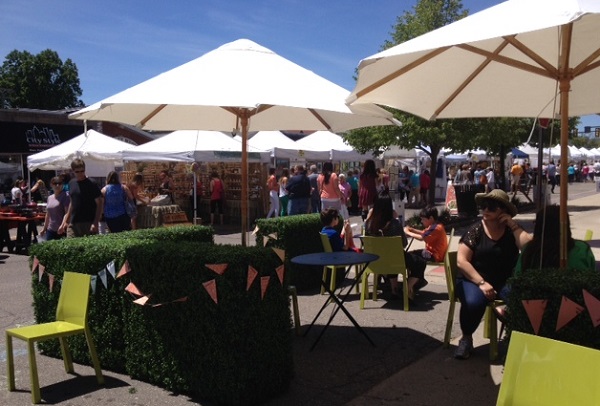 Berkley city officials are looking to create more interest in its downtown district by adding a permanent community-gathering space at the intersection of 12 Mile Road and Robina Street, five blocks west of Coolidge.

To assist in the planning process, the Michigan Municipal League partnered with Berkley to organize a community brainstorming session about possible ways to improve the site now marked by bumpy roads, dated planters, and poorly maintained sidewalks.

“That area was targeted in the city’s master plan a few years ago, because it’s just a little bit run down,” says Sarah Craft, program coordinator of the Lansing-based Michigan Municipal League. “It’s basically in the heart of downtown, but hasn’t really been treated like it is — hopefully it will be in the future.”

The idea session, held in June, garnered suggestions and feedback, which included closing the road to make a pedestrian-only public plaza; hosting weekly outdoor summer movies; installing a splash pad; and planting more plants and trees. Once the comments and ideas are organized, they will be presented to the city council.

“There were certainly be more community engagement necessary to (complete the) final plans and secure funding,” Craft says. “So it will probably be at least a year before anything will actually change.”

Twelve Mile, between Coolidge and Greenfield, is populated with local businesses and restaurants. During the summer, the site hosts the Robina Rhapsody concert series on the third Thursday of each month.