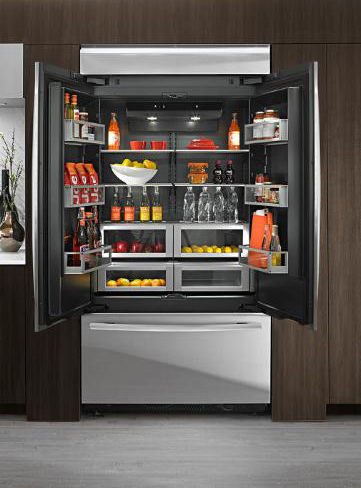 As part of a busy year that will see the debut of 50 appliances, Benton Harbor-based Jenn-Air introduced 10 products — including a built-in coffee system — at the Architectural Digest Home Design Show in Manhattan this past weekend.

Founded in 1947, the company, acquired by Benton Harbor-based Whirlpool Corp. in 2006, has increased its number of new products by about 10 percent annually over the past four years.

Among the appliances introduced was a built-in coffee system, which is two feet wide and can be incorporated into an array of cabinetry designs. It can grind whole beans, and it includes a frothing system that can be cleaned with the touch of a button.

“With the introduction of this product into the category, users are able to shift their focus from past systems that required a complex maintenance process and focus on what matters most: a perfectly crafted cup of coffee,” said Juliet Johnson, spokeswoman for Jenn-Air.

Also new to the Jenn-Air catalog are 30- and 36-inch five-burner cooktops as well as three refrigerators — available in October — that swap out traditional white interiors for black. The refrigerators include LED lighting throughout the cabinet and a climate control system that allows for high humidity refrigerator air in addition to dry freezer air.

Brian Maynard, a Jenn-Air spokesman, adds the new refrigerator’s soft close drawers are reminiscent of high-end cabinetry. “That’s what separates a luxury appliance brand from other brands. It’s the finish of the product, the color, the lighting — it’s all of the details that make up the whole product.

“We re-launched (Jenn-Air) to its original positioning of being a luxury appliance brand in 2010,” Maynard says. “It had really occupied the space for the first 30 years of its existence before it was used as a premium brand. When you re-launch a brand like that, it’s important to have the products and marketing that go along with it, so we’ve been building that product pipeline for a number of years.”

In other news, the company recently celebrated the opening of its first showroom, located at the Decoration & Design Annex in New York.