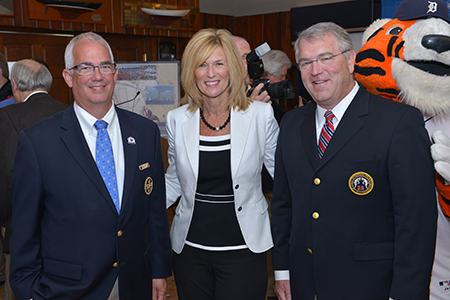 As Detroit’s Bayview Yacht Club celebrates its 100th year, officials expect this year’s annual Bell’s Beer Bayview Mackinac Race to have more sailing teams participating in the sailing race between Port Huron and Mackinac Island in July. New this year is a partnership with the Chicago Yacht Club to help support autism.

“We are currently projecting in excess of 260 boats competing this year,” says Peter Wenzler, chairman of the Bell’s Beer Bayview Mackinac Race. “This will the best attended event we’ve had in over 15 years. It represents a 16 percent increase overall in participation from last year.”

Wenzler says new rules allowing for shorter crafts has let to an increase in participation in the annual race.

The race offers two courses — the shorter route for smaller and slower craft that hugs the Michigan coastline and covers 204 nautical miles. The other option is the Cove Island course that covers 259 nautical miles. Wenzler expects most of the boats will arrive at Mackinac Island on July 20, though some larger craft may come in Sunday evening.

Wenzler says Kalamazoo-based Bell’s Brewery Inc.’s support has made it possible to keep the entry fee the same as last year, at $14 a foot. Bell’s is also supporting a program that offers young adults with autism the opportunity to experience the race.

“This year, we at Bell’s Brewery are proud to be the title sponsor for the Set Sail for Autism program, which is an organization that gives young adults with autism the opportunity to sail back from Mackinac Island,” says Laura Bell, vice president of Bell’s.

The Set Sail for Autism program is also partnering with Oakland University’s Center for Autism to offer a workshop for adults with autism that will teach them skills to film the Bayview Mackinac Race. This year the program has expanded to include boats competing in the Chicago Yacht Club’s Race to Mackinac on July 11.

“As the economy continues to improve, more companies see the strength of the race as a way to associate their brand with one of the true summer traditions in Michigan,” Bratton says. “Sailor and fan participation will continue to grow and one of the benefactors will continue to be our non-profit partners.”

Ten years after the club was founded, it held its first race with 12 wooden boats competing. The 2015 race will begin on July 18 in Port Huron. Race organizers say they expect an increase in registered boats as a result of a reduced minimum required boat length, from 27 to 24 feet.