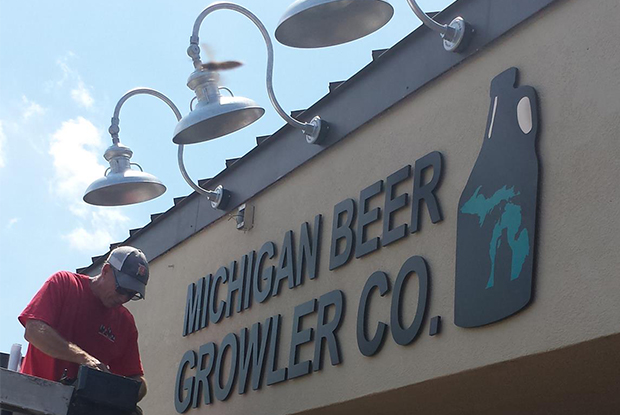 There will be 26 beers, two hard ciders, and two craft sodas on tap at the former Lois Gross Cleaners at Southfield Road and 13 Mile in Beverly Hills, starting in mid-to late October. But with seating for 15 and daily closing scheduled for 8 p.m., this won’t be your standard late-night bar.

“It’s not really a bar at all,” says Janae Condit, founder and owner of the Michigan Beer Growler Co. “It’s a place to come in and fill your growlers. Although, we will serve flights and pints to help people figure out what kind of growler they want.”

Condit says she was inspired to bring the growler filling station concept home after seeing something similar during a trip to Atlanta. “I thought, why don’t we have something like this in Michigan? There are a lot of restaurants that serve food and have growlers that people can (buy) on their way out after they have dinner, but I didn’t want to serve food. This is all about the beer.”

Customers will be able to purchase refillable 64- or 32-ounce glass growlers, or bring in their own to the new concept at 31221 Southfield Rd. Pricing for the beer, based on alcohol content, will range from $9 to $30. Once the store seals the growler, it will last for up to a week when refrigerated.

While most of the beer will be made in Michigan, five taps will be dedicated to out-of-state or European brands. “It’s a great way to try new beer. A lot of people have been limited to bottles, but this way, it hasn’t been exposed to light. It’s as fresh as you’re going to get it,” she says.

To begin, Condit says she and Larry Burns — Condit’s father and a major beer enthusiast — will staff the new store. The plan is to hire 5 to 8 employees once things take off.