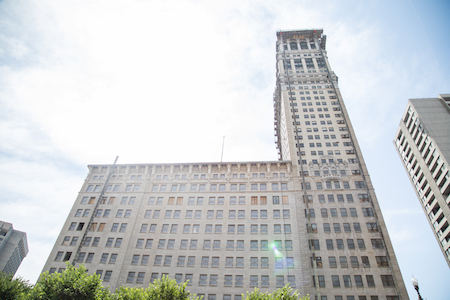 Detroit-based Bedrock, part of the Quicken Loans Family of Companies, today announced it will invest $2.1 billion in four large projects in downtown Detroit that will create up to 24,000 jobs — 15,000 construction positions and 9,000 jobs — once the redevelopment efforts are completed over the next five years.

The announcement was made in the lobby of the Book Tower and neighboring Book Building along Washington Blvd., both of which have been vacant for more than a decade. Bedrock acquired the tower and building in August 2014, and over the last 18 months has been cleaning both the interior and exterior of the structures. It will take another six months to complete the exterior.

The two buildings are part of a $313 million investment that will transform the ground floor space into new shops and restaurants. The upper floors of the 13-story Book Building will offer office space, while the Book Tower will include 95 residential units and a hotel. The entire project will be completed in 2021 and will include the restoration of the original, multi-story lobby.

The other projects include:

Hudson’s Site — The approximately $900 million, 1 million square-foot redevelopment of the Hudson’s site will create a landmark attraction and make Detroit a national and international visitor destination. The project will include the tallest tower in Michigan (800 feet), complete with a publicly accessible sky deck on top of the residential floors. It also includes restaurant, retail, and office space, and extensive exhibit (1,500-seat theater), public space, and elevated gardens.

One Campus Martius — The $95 million expansion of the One Campus Martius Building (formerly Compuware Building) will provide 310,000 square feet of office space. The expansion, which is expected to take two years to complete, is at the northeast section of the office structure. The lobby also will be updated.

“It’s hard to describe how meaningful this is,” says Dan Gilbert, founder and chairman of Quicken Loans, who began moving a number of his companies into Detroit in 2010. Today, the collective firms employ more than 17,000 workers. “It feels to me like it’s the best it has ever been in Detroit and Michigan, and now we’re looking at a vertical cycle of job creation.”

The four projects — Book, Hudson’s, Monroe, and One Campus Martius — will now go before the Detroit Brownfield Redevelopment Authority as the first step toward the approval of new state financing under the MIthrive program enacted into law earlier this year.

MIthrive builds on the existing local Brownfield Tax Increment Financing (TIF) program by providing additional state support needed to make the most significant development opportunities across Michigan financially possible. The program works by allowing such projects to keep a portion of the new state tax revenue they generate to help close the gap between high redevelopment costs and what market rents can support.

“Transformational projects like these are necessary to both accommodate the expansion of current downtown businesses as well as making Detroit a legitimate competitor for new businesses and massive opportunities (like Amazon’s HQ2), and attracting vital talent from all over the country and world,” says Gilbert. “In addition, these critical projects will attract new visitors and residents as well as countless new visitors and businesses like Amazon to the city, which will create a ripple effect of economic impact and job creation.”

“The economic impact this project will have on our city is larger than anything we’ve seen in generations,” says Duggan. “Not only will it produce thousands of new jobs and opportunities for Detroiters, it will reshape the city’s skyline and attract even more re-investment in Detroit.”

As much as possible, Gilbert says all of the buildings, especially at ground level, will be opened up. “We’ve learned that people inside a building want to look out, and people outside want to look in,” he says. “Detroit is a legitimate contender to get Amazon’s headquarters, and we have 30 to 40 people working on it. We even have large consulting firms that are donating their services to help us.”

Earlier this month, Seattle-based Amazon announced it planned to build a second headquarters, dubbed HQ2, that will cost up to $5 billion and employ thousands of workers. The bids are due in October, and Detroit may join with Windsor in submitting its bid.