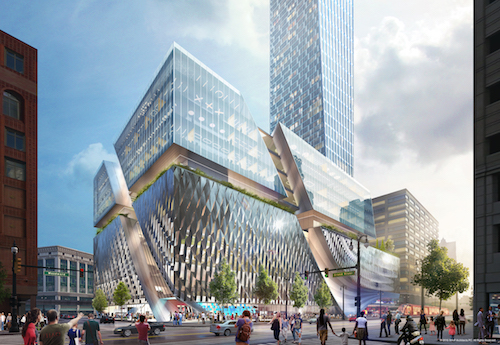 After preliminary designs from Detroit-based commercial real estate firm Bedrock were presented Wednesday, the Downtown Development Authority approved a timeline for construction for the historic Woodward Avenue Hudson’s site to occur by Dec. 1. The new schedule aligns the groundbreaking of the Hudson’s development with the Michigan Thrive initiative, an economic development tool supported by more than 40 communities throughout Michigan.

Dan Gilbert, founder and chairman of Rock Ventures and Quicken Loans Inc. and founding partner of Bedrock, believes that as the largest construction project seen by Detroit in decades, the development “will anchor Woodward Avenue, making it the economic engine of the city once again.” Plans for the new, 52-story, 734-foot transformational development will make it the tallest building in Detroit. The project includes a nine-story podium and residential tower that rises from the podium. The structure will offer 1.2 million gross square feet of space and include 700 parking spaces underneath the structure.

“For long-time Detroiters, we remember what Hudson’s represented. It wasn’t just a department store — it was the economic engine of Detroit. It drew residents and visitors downtown, where they spent a day shopping at Hudson’s and visiting the retail, restaurants, and theaters around it,” says Gilbert. “Our goal is to create a development that exceeds the economic and experiential impact even Hudson’s had on the city. We believe this project is so unique that it can help put Detroit back on the national — and even global — map for world-class architecture, talent attraction, technology innovation, and job creation.”

Gilbert adds that transformative developments like Hudson’s often serve as catalysts for an entire city and region, attracting visitors, creating jobs, and ultimately a “positive ripple effect” regarding talent, business, and investment throughout the city. An economic impact survey conducted by New York-based WSP-Parsons Brinkerhoff estimates the project will attract more than three million unique visitors per year, create more than 5,800 direct and indirect jobs, generate $1.5 billion in new economic output during construction, and generate $560 million per year in economic output thereafter.

The development plans were designed by New York City-based SHoP Architects in partnership with Detroit-based Hamilton Anderson Associates, with an emphasis on amenities such as retail, parking, technology, and art for residents and visitors.

“In its heyday, Hudson’s was a premier destination in the heart of downtown. After the flagship store closed in 1983, the structure would bring back fond memories of a vibrant downtown,” says Sandra Laux, project architect for Hamilton Anderson Associates. “We now have the opportunity to be a part of creating unique, new architecture in one of the few vacant sites downtown.”