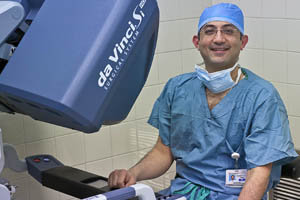 Surgeons at Beaumont Health System are reporting success in a new minimally invasive technique that uses robotic surgery to remove cancerous kidney tumors in high-risk patients. Traditionally, such high-risk procedures were only performed through open surgery.

Doctors at Royal Oak’s Beaumont Hospital say they have successfully performed the pioneering procedure, known as a robotic partial nephrectomy with cooling, on seven patients. Hospital spokesman Robert Ortlieb says the first procedure was performed in September, and the final one was completed this month. He says two more surgeries are scheduled with several additional referrals coming in from other hospitals.

“Our less invasive kidney-cooling technique can preserve kidney function, avoiding the need for dialysis or transplantation surgery,” says robotic surgeon Sanjeev Kaul, M.D., a Beaumont urologist. “The use of ice enables us to cool the kidney and ensures we have a good blood and oxygen supply when resecting (surgically removing) the tumor.”

Kaul says by using smaller incisions, the surgery usually results in a shorter recovery for the patient, along with less pain and a shorter hospitalization.

All seven patients previously had a kidney removed because of cancer, and Kaul says removal of the only remaining kidney in the patients was not an option, since they would have to endure permanent dialysis or kidney transplantation.

“This robotic kidney cooling technique shows great promise in removing tumors from our very high-risk patients with only one kidney,” Kaul says. “The use of ice enables us to cool the kidney during keyhole surgery and prevents kidney damage while ridding the patient of cancer.”

Each year, approximately 51,000 adults in the U.S. develop kidney cancer. Traditionally, a partial nephrectomy is performed through an open, larger incision, which results in typically longer recovery for the patient, along with more pain and a longer hospital stay, Kaul says.

According to the National Institutes of Health, kidneys are vital organs that maintain a balance of water and other substances in the body. Their main function is to filter blood. Kidneys remove waste and toxins from blood. They also produce hormones that control blood pressure, activate vitamin D, and make red blood cells.